I have learned something about blogging in the last week or two. And it’s this. If you’re going to write about a particular event, do it when that event happens or as close to the date as possible.

I take lots of photographs ( It’s a photographer thing!  ) and often bring the camera along whenever we go out. I’ll take a few shots, review them later in the day and sometimes decide that I could write something about them. This is what happened when I visited Ballina Heritage Day in July of this year. 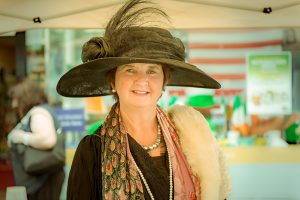 The Heritage Day takes place every July as part of the Ballina Salmon Festival. I always pop down for a look and to soak up some of the vibe. It’s really enjoyable to join the thousands and walk around the streets that are closed to traffic. There are loads of stalls, street vendors, and street entertainers. Many of the locals dress in traditional garb for the occasion, like Valerie who kindly let me take her shot. Thanks, Valerie.
Can you spot the photographic error in this shot?

So, I got some pictures and I did actually post one or two on my Facebook page around that time. But I had some more that I liked and thought I’d use them in a blog post. However, I procrastinated. I must do some about my procrastination issue … someday. 🙂

But here I am in September writing about it and to tell the truth, I’ve forgotten a lot about what happened that day in July. The sights, the smells, the sounds and the atmosphere are lost. All I have left are these photos. And it made me realize that sometimes, photos need words to accompany them – to add some context – to explain a little about the event.
So let’s look at the photos and see what little I can remember from that day. 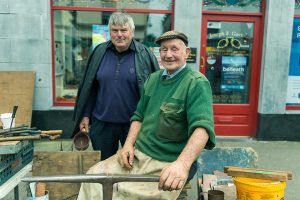 I actually shot this guy at the same festival last year. I feel like I owe him so I’ll be sure to introduce myself if we meet again and maybe get a print for him. He was at a stall displaying metalwork and iron tools. I thought the plaits in his beard were interesting. I’m sure there was something else that caught my eye about this shot but because I’ve left it too long to write this post, that “something else” is lost.

These two girls were attending another stall. I forget what they were selling and their 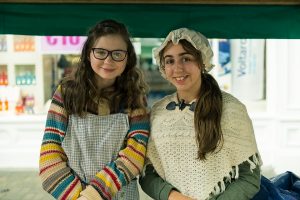 names – another reason to blog at the time of the event. But they happily posed for my camera. I find people are quite willing to have you take their shot if you ask them nicely.

All together now – ahhh. 🙂 I admire young kids like this guy and the lads at the top of the article. These are the entrepreneurs of tomorrow. There were lots of younger people on 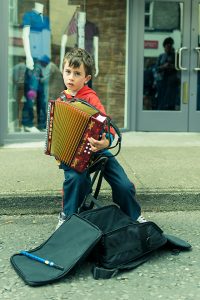 the street displaying their talents and making a few bob. I didn’t ask his permission to take his photo. You cannot do that for every shot as you’ll lose the moment. As far as I’m aware, the law says that it’s perfectly legal to shoot people in public but you must always be conscious of their privacy.

I have another shot of a lady from this day, but she asked that I don’t make it public. She didn’t like the way she looked. {She looks fine actually) However, I respect her request and will not post it. It’s not a bad photo – it’s quite humorous but I always respect people preferences.
I haven’t deleted it though. It’s still on my computer and I often have a chuckle whenever I come across it in my Lightroom catalog

In the next shot, these ladies were more than happy to pose. I don’t think this is their clubbing gear. I could be wrong though – it’s quite a while since I was at a nightclub and the dresses were considerably shorter when I was. 🙂 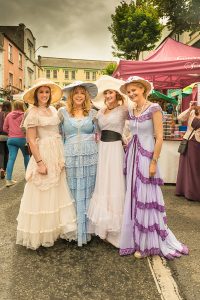 Then there is this guy in the photo at the bottom. I also shot him last year but I have forgotten what he had on display too. I think it was some type of metalwork. There was a twinkle in his eye and he was happy to have his photo taken. 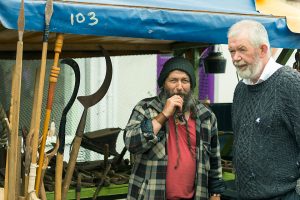 And that’s all I have to say about the 2016 Heritage Day in Ballina. So, the lesson is – if you’re going to write about a particular event, do it as close to the event date as possible. You’ll remember more and be able to write a much more engaging post.

Thanks for reading this far and if you have any tips for blogging, do share them in a comment below.