Death of an Irish Town?

A few weeks ago, I had to do some work in Knock. For those that don’t know, Knock is a small village in County Mayo. It is also a Catholic pilgrimage and prayer site. Its notability is derived from the Knock Shrine, at which the Virgin Mary, together with Saint Joseph and John the Evangelist, allegedly appeared on 21 August 1879.

As a result, Knock has become a major Irish pilgrimage site of prayer and worship and one of Europe’s major Catholic Marian shrines, together with Lourdes and Fatima. Today this shrine is visited by one and a half million pilgrims annually.

I was last here many, many years ago, when I and the rest of my generation were dragged there by our parents. I remember it as being a busy spot with lots of pilgrims and religious vendors. I never had a reason to go back until this job brought me there. When I finished the shoot, I decided I’d grab a coffee before driving home. 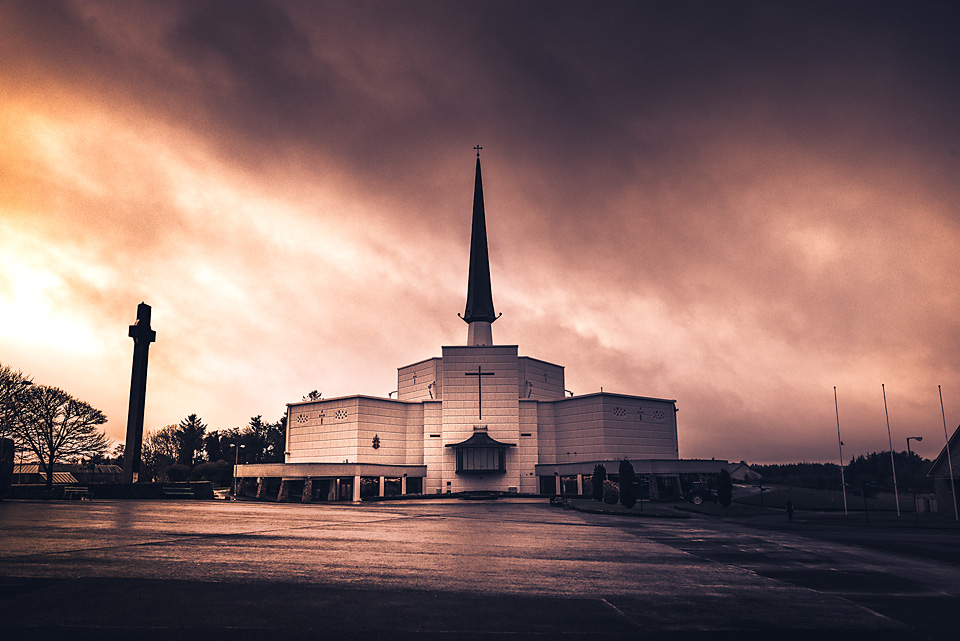 It was a dull grey day and I decided to visit the basilica that was built in the 1970’s. I’d never seen this before. It is a very impressive building that dominates the village skyline. The interior is equally impressive. The mosaic behind the altar is composed of 1.5 million individual pieces and was, you guessed it – impressive. Everything here was shiny … and impressive. 🙂 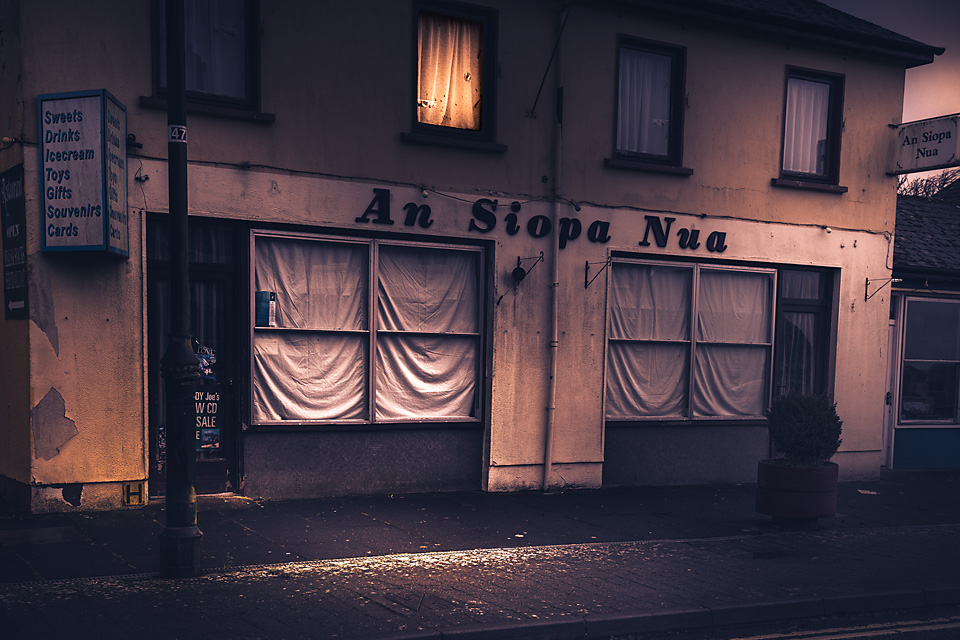 Unlike the buildings outside! After leaving the basilica, I wandered around the village in search of a coffee. The shops selling religious items were still there, punctuated by the odd cafe or restaurant. Lots of places appeared to be closed and sadly, very run down.

This shop is called An Siopa Nua- Irish for The New Shop. It didn’t look that new to me. It was strange to see such opulence side by side with the rundown buildings in the village.

Below is a selection of other premises dotted along the long street that is Knock. 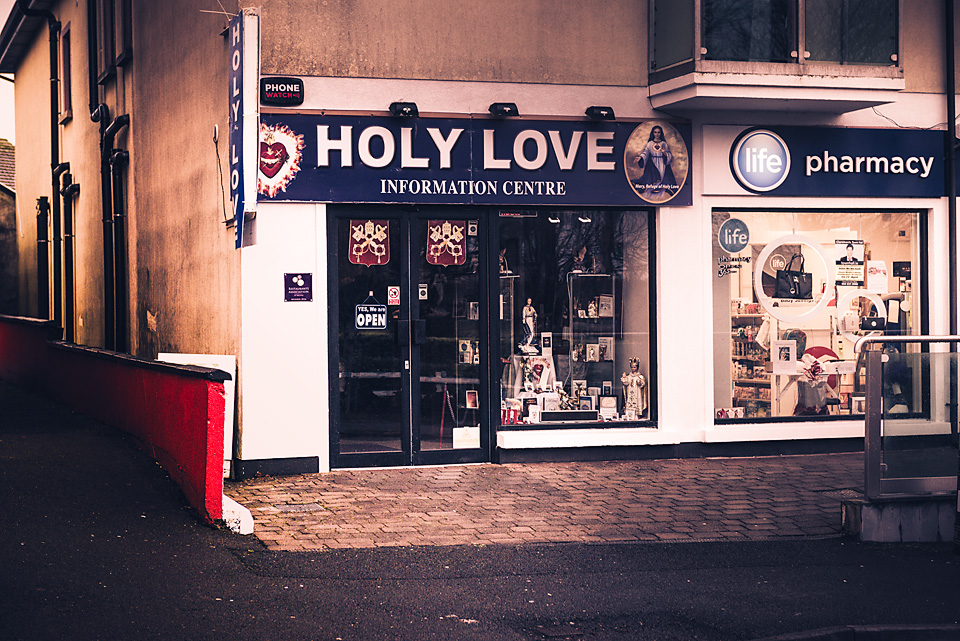 Holy Love Information Centre. The name made me feel a little uncomfortable and I did wonder what information they dispensed. Equally so with Life pharmacy. 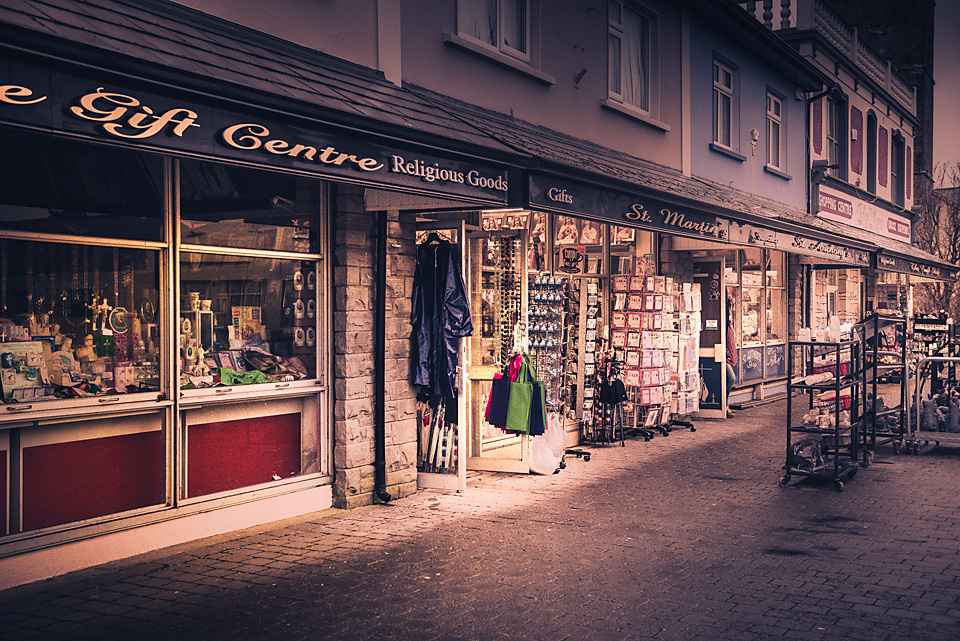 All of the major saints seem to have an outlet on the main street. Competition must be pretty fierce as they all appear to sell the same goods.

I continued onwards looking for somewhere to get a coffee but most cafes seemed to be closed. This place, with its weird mix of food and religion somehow just didn’t do it for me. 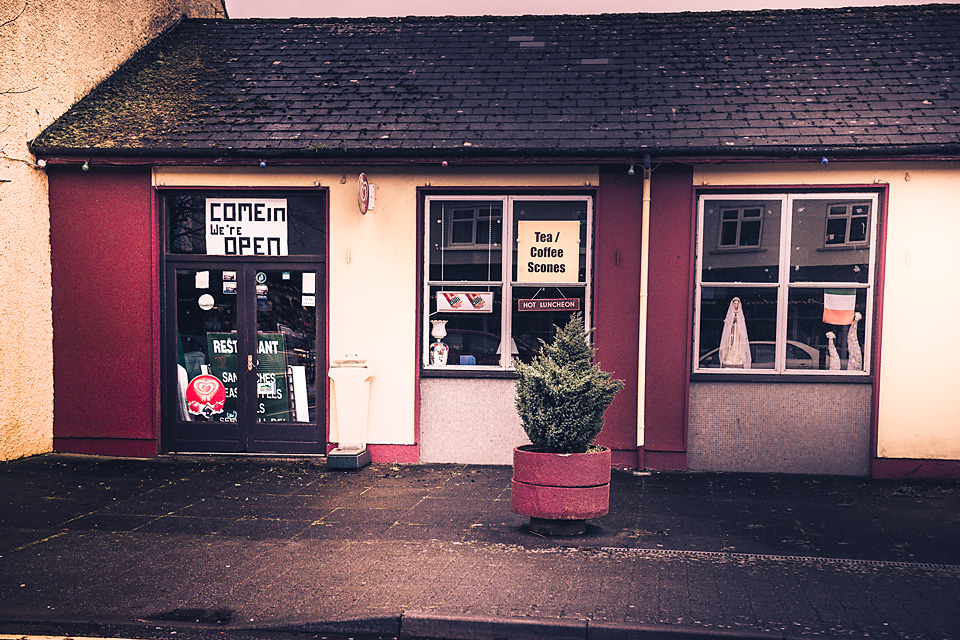 The promise of hot luncheon, coffee and scones followed by some Club orange and HB ice cream was tempting but peering in the window revealed a dark and abandoned place. 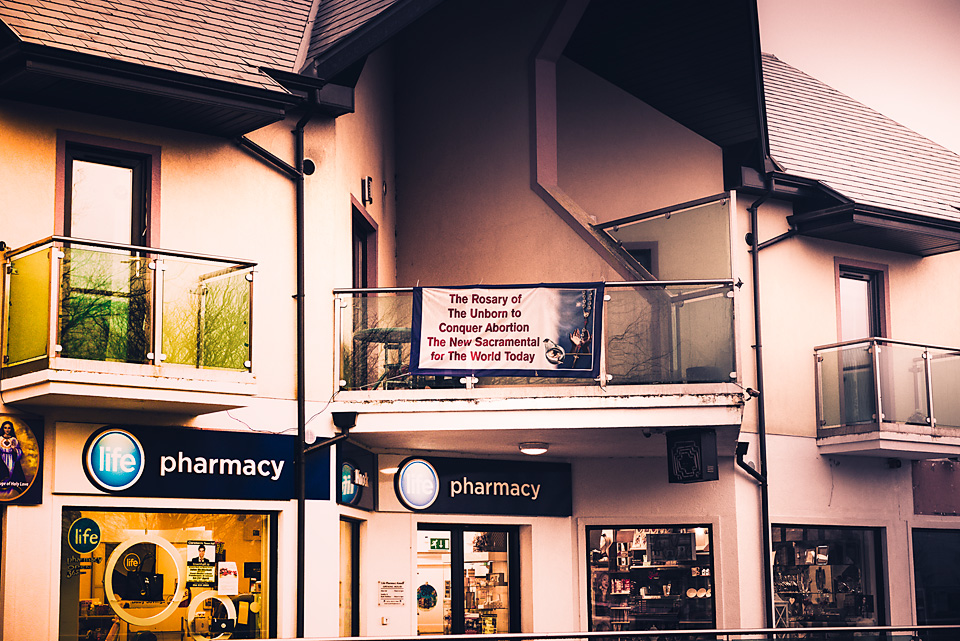 The Rosary of The Unborn to Conquer Abortion The New Sacramental for The World Today. No, I couldn’t figure out what this meant either. The capitalisation of every second word didn’t help. Still, it looks like a nice balcony where you could sit out with a coffee. If only you could get a coffee! 🙂 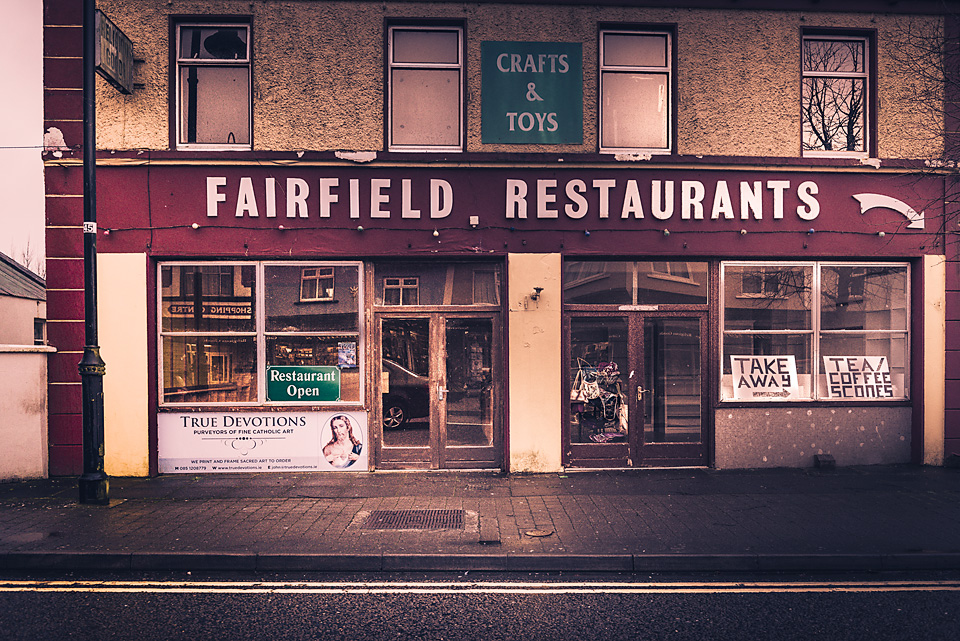 Finally, a place where I could get a coffee. An unusual placement for your second shop. I would have thought a different town – maybe a different street, but who am I to question the business model.
And a choice of two restaurants … or is it a restaurant or a takeaway, or a crafts and toys shop, or a purveyor of fine Catholic art? Either way, they were all closed. 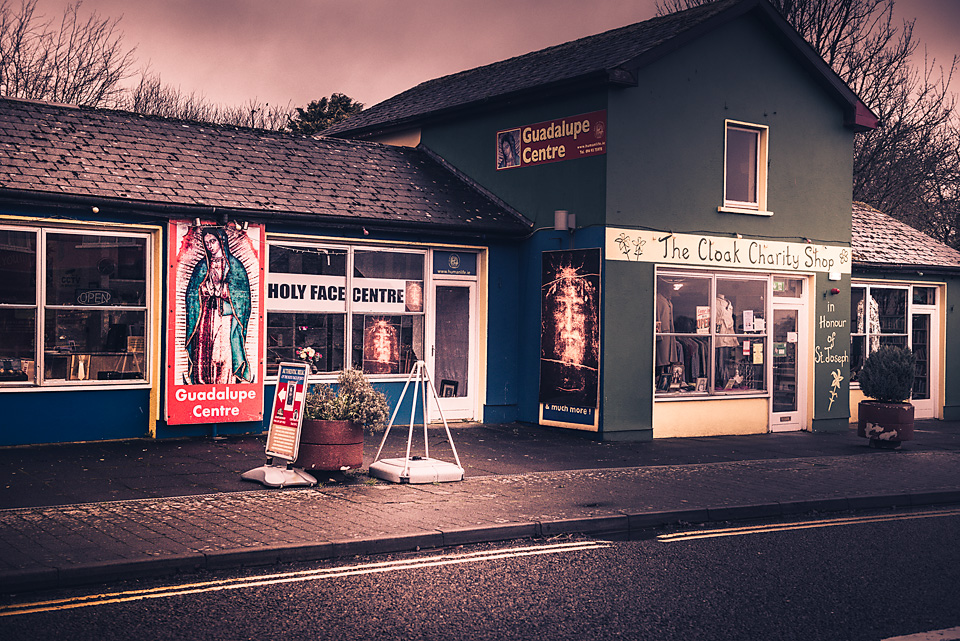 By this time, I was beginning to give up my quest for coffee and felt a strange desire to buy a religious statue or rosary. Maybe the Guadalupe Centre or The Holy Face Centre could help. Things were becoming more and more confusing and like the Shroud of Turin, a little fake.
However, my spirits (excuse the pun) were lifted briefly when I mistook the name of the other shop – I thought it said The Charity Cloak Shop. I’ve always wanted a cloak, and a cheap one would be perfect. 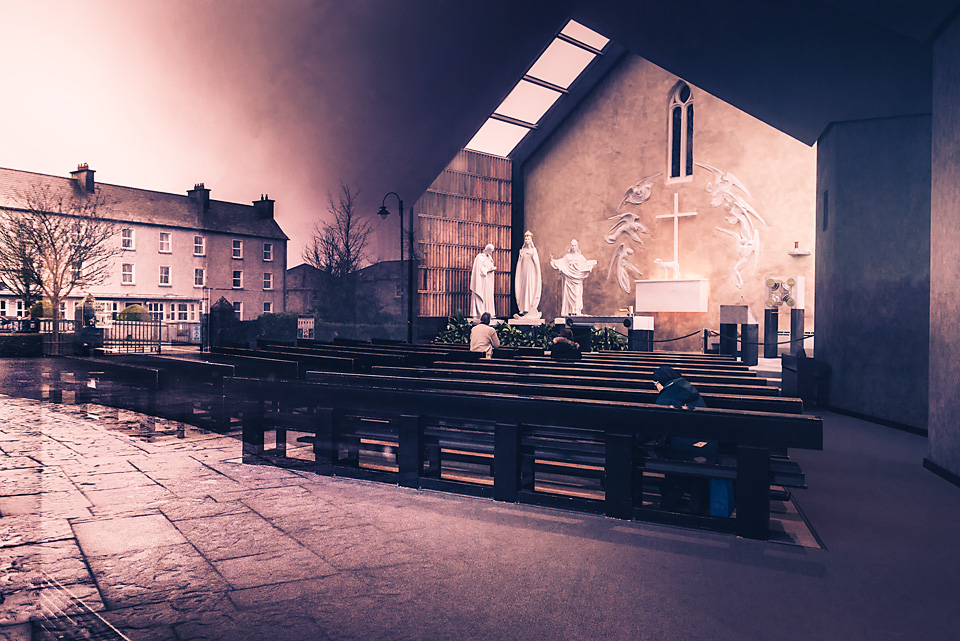 This is the gable wall where on 21 August 1879, fifteen people witnessed what they stated was an apparition of Our Lady, Saint Joseph, and Saint John the Evangelist. I shot this through the large glass facade and used a polarising filter to pick up on the reflections of the houses outside in it. I thought it was a cool effect …  or maybe the lack of caffeine was beginning to kick in. 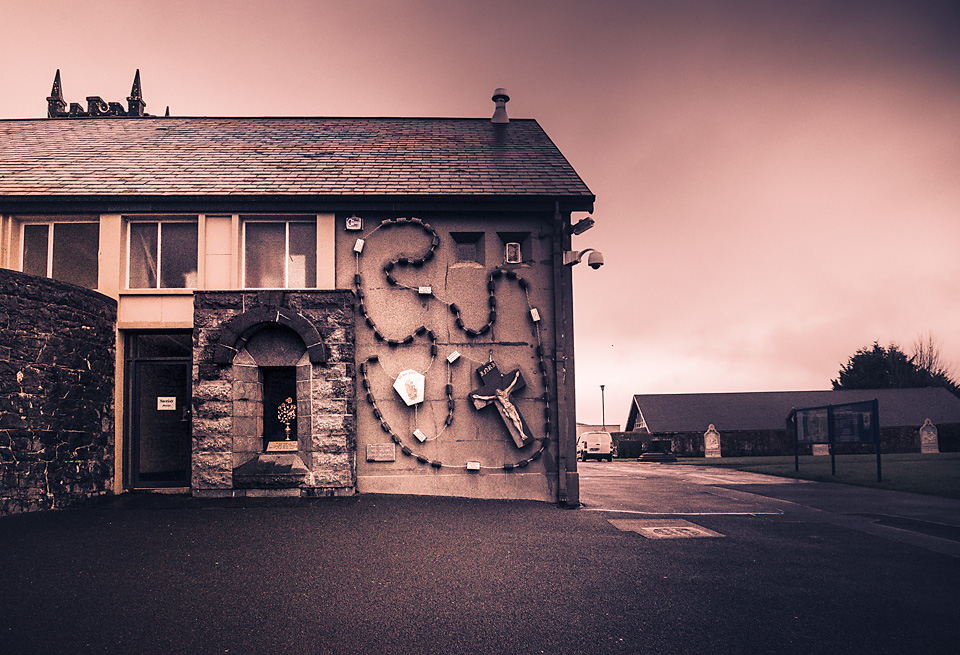 A giant rosary. What could it mean? Curiouser and curiouser! For someone like me, Knock was a strange but highly interesting place. There’s loads of photographic potential and I would have liked to have seen it in a different light. 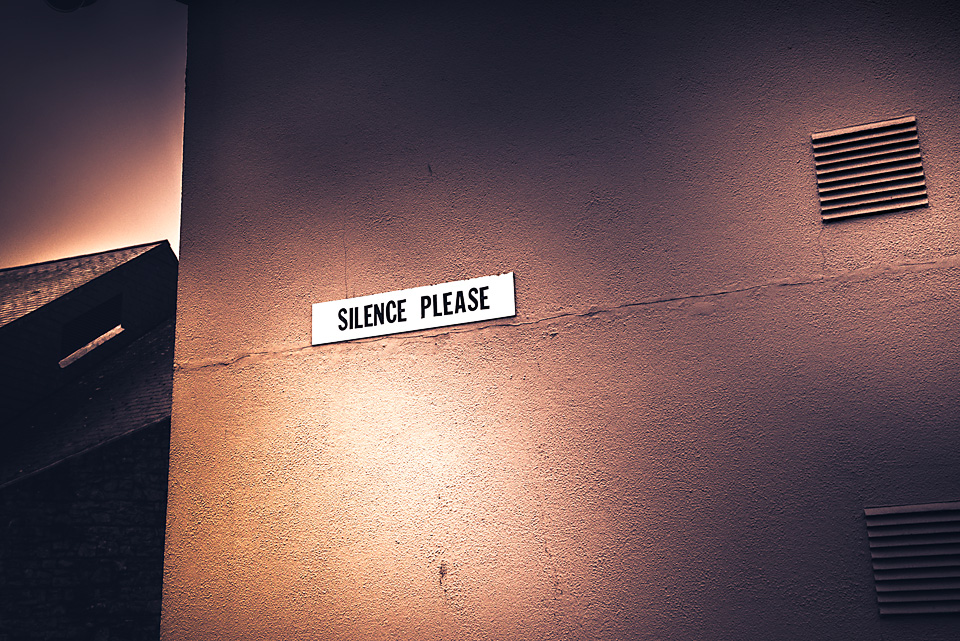 However, the day I was there, it seemed like yet another forgotten west of Ireland village. I’d have thought this place would be booming with that 1.5 million visitors every year.
The late John Healy, the author of Death of an Irish Town, first published in 1968 and republished in 1988 under the title ‘No One Shouted Stop’ springs to mind.
The book chronicled and railed against the economic decline of his Mayo hometown, Charlestown.
It seems he could well have been talking about Knock. I hope not. I’ll go back to shoot it again someday and I’ll be sure to bring a flask of coffee too.