My apologies for the missing photos on this post. They got lost in a hard drive failure.

We visited Derry city last year and I wrote about it. At that time I said we would go back. And we did! We spent a few days in the town last month (July)  and had a great time.

Shortly before we travelled, we were in a local coffee shop and were talking to the waiter there. He’s a sound lad but he expressed surprise when we told him that we were going to Derry for a few days. Mostly because it was the week of the 12th July – the traditional Unionist marching season in northern Ireland. To be honest, we had never given it much consideration and if the truth be told, I don’t think there is too much to be concerned about. In any event, we were to return home on July 11th. 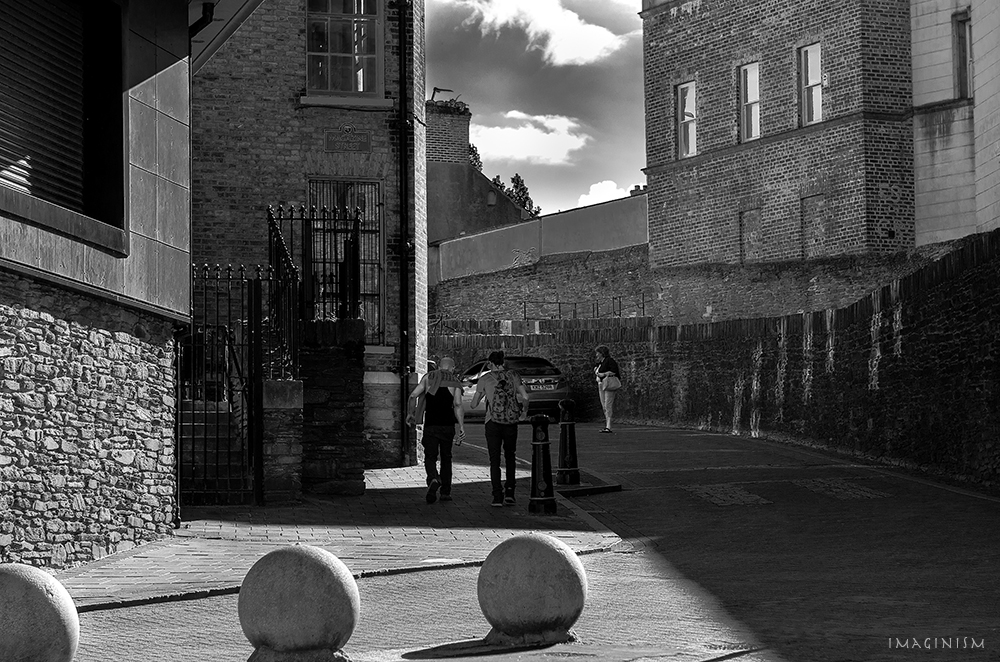 It’s about a three hours drive to Derry but we stopped off on the way. We had booked into the City Hotel. It’s a nice hotel that is located very centrally. As usual, the staff were lovely and it catered for all our needs. We used Derry as a base for exploring around the province.

Northern Ireland is a beautiful place. It is full of great things to see and it’s small enough to drive around pretty easily – you won’t spend all day behind the wheel! Everything is within 30 to 40 minutes of each other. The people are sound ( In Ireland, that means very nice) and are very open about the ongoing history here. 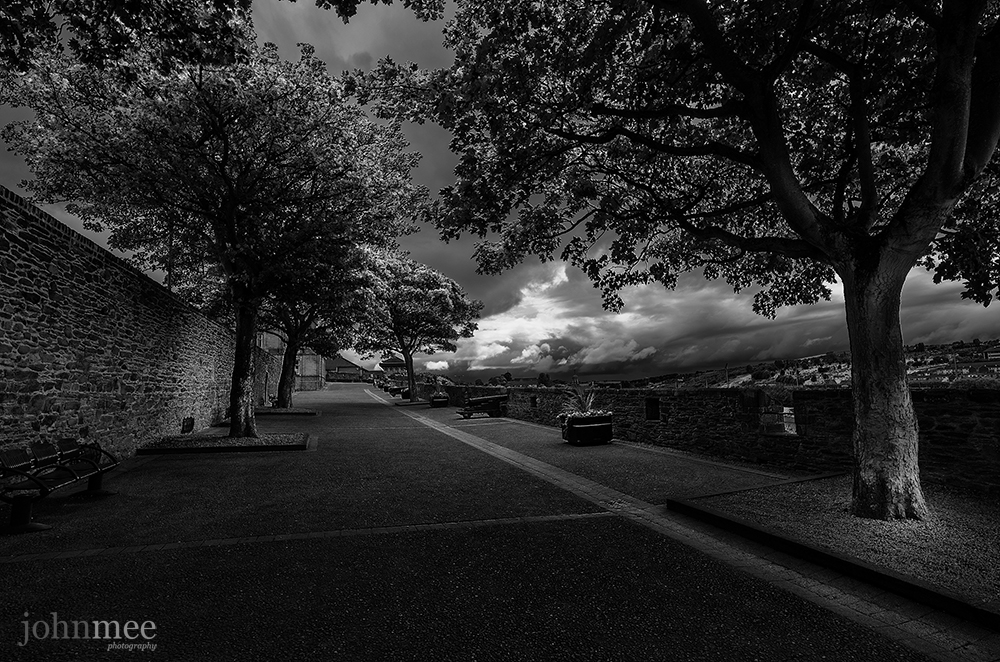 We enjoyed the hospitality in Derry and done the usual touristy things, including walking the Walls and crossing over the Peace Bridge. We also traveled up the coastline to a few other locations. One of the places we visited was Downhill Demesne and Hazlett House. It was only 45 minutes drive from our base and is really worth the trip. It’s owned by the National Trust and they have done a great job in preserving the place.The highlight of this was Mussenden Temple near Castlerock. This location has been featured on Game of Thrones a few times. It’s a beautiful building and it’s location is absolutely stunning. We were lucky enough to be there on a day that the temple was open – apparently, some days it’s closed. The views from the inside are to die for. 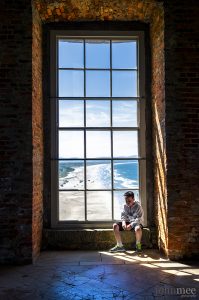 After Mussenden, we drove to the Carrick-a-Rede rope bridge at Ballintoy. I must admit I was a little apprehensive on the walk up to the bridge, which is 30 metres above the sea, rocks and certain death … unless you can bounce! 🙂 But as it turned out, it wasn’t so bad. I had to put on a brave face as my son Kaelan was crossing it with us. He talked a lot on the walk to the bridge which could have been a sign of nervousness, or more than likely, a sign that he does actually talk a lot!
However, I must say he surprised us and crossed the bridge without a bother.

As with our previous visit, we walked the famous Walls of Derry. I’ll never tire of them. It’s full of history and a great way to see loads of the city. This time, we visited the famous Saint Augustine’s church. I can’t say I was overly impressed with the interior but on the outside, it’s a beautiful piece of architecture. 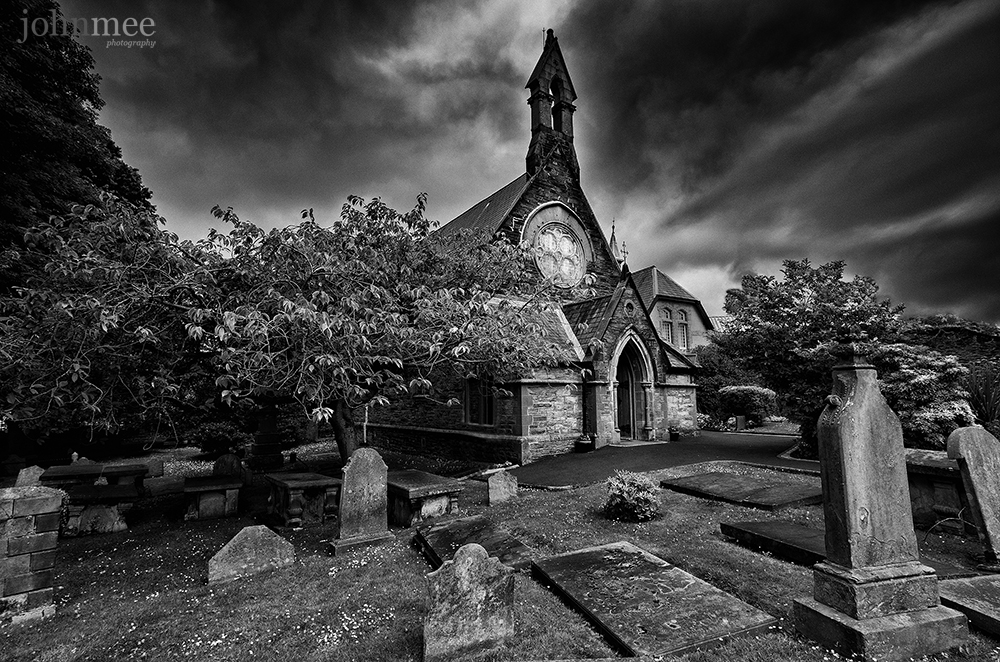 By now, the sunny day was beginning to take it’s toll on us and we decided to take refuge in a local tavern. Peadar O’Donnell’s bar looks welcoming and we stopped for refreshments. It’s a busy spot and the “craic” seems to be flowing. We had said that we would return for a few drinks later in the evening. However, we never did … I suppose that is one more reason that we’ll just have to visit Derry again!

Derry is quite a good shopping town too. It’s got two large shopping centres in the middle of town and plenty of nearby streets to browse around in. One thing that I particularly liked was the amount of pedestrianised walkways and squares. And they were all within a short stroll of each other.

We visited the Guildhall which was built in 1890. This is where the elected members of Derry City Council meet. The Guildhall also hosts many events of a social and political nature. Indeed, on the Sunday we were in Derry it was playing host to a wedding party. Over its 120 year history the Guildhall has been destroyed twice – by fire in 1908 and through bomb attacks in 1972.

The council chamber at the The Guildhall in Derry. From 2000 to 2005 this was the seat of the Bloody Sunday Inquiry headed by Lord Saville, which was published in June 2010.

Looking at the sky. A detail from the Tower Museum in Derry,

One of the things that really struck me was how Derry city became so quiet in the evening. We were staying in a city centre hotel, on the fourth floor overlooking a busy intersection. However after 9 pm, there was very little activity on this piece of road. 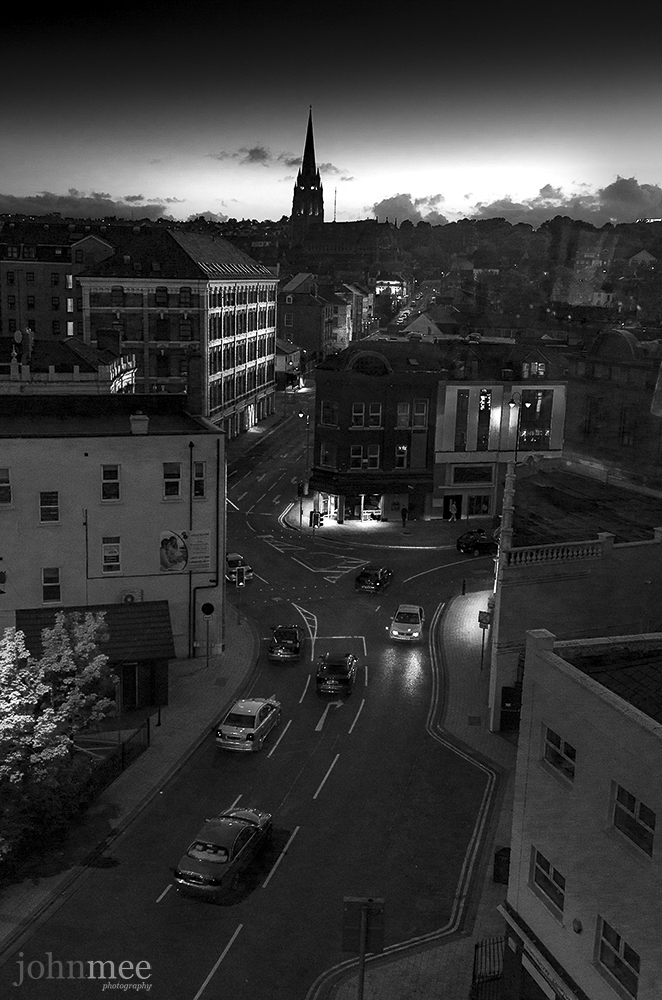 After a few days, we drove back from the North. Passing through small towns on the way home, we watched as Apprentice boys prepared for their marches the following day and wondered at the pavement kerbs painted in the colours of the Union Jack.
We had a great few days there and would highly recommend it to anyone.