If you’re going to be taking photographs on a regular basis, it’s very important to have a workflow. After a few weeks or months of shooting, it will become apparent that some form of organisation is necessary. This will make it easier to track down specific images in the future and also make for a more efficient backup system.
In this post, I will document my workflow. This system works for me, but you may find it useful as a basis for your own workflow. This post only details the importing and organising of photos from a memory card to your Lightroom catalogue. Later on, I will give you an insight into my editing process. 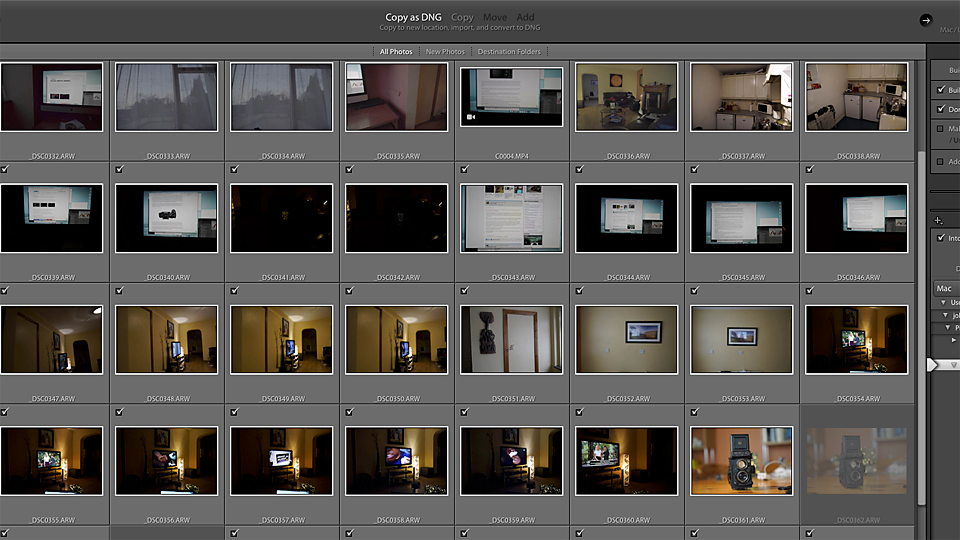 First, I import the contents of the memory card into Lightroom. I used to convert the Nikon NEF files to DNG during the import process. However, since moving from the Nikon D7000 to the Nikon D800, I have decided to dispense with that part of the process. Converting to DNG downsizes the file size from an average of 75 Mb to about 20 Mb. It didn’t make sense to me to lose that much information from my raw files.

Lets Get Organised
After the images are imported, I set about organising them. Step One involves having a quick look through them and discarding any that may be blurred, underexposed or overexposed.

In Step Two I will delete any duplicates by examining each photograph at 100% magnification to determine the sharpest. Step Three involves renaming, key-wording and rating the images I want to keep.

For instance, the shot below is over exposed. In Lightroom you can show overexposed areas quite easily. Look at the histogram in the top right corner of the Develop module. Then click on the small grey triangle in the top right corner of the histogram. This will activate the highlight clipping warning. If you do not want to have this activated all the time, then hovering your cursor over the triangle will temporarily show the overexposed areas. Clicking on the triangle in the top left of the histogram will activate the shadow clipping warning and areas that are pure black or underexposed will show up in blue. 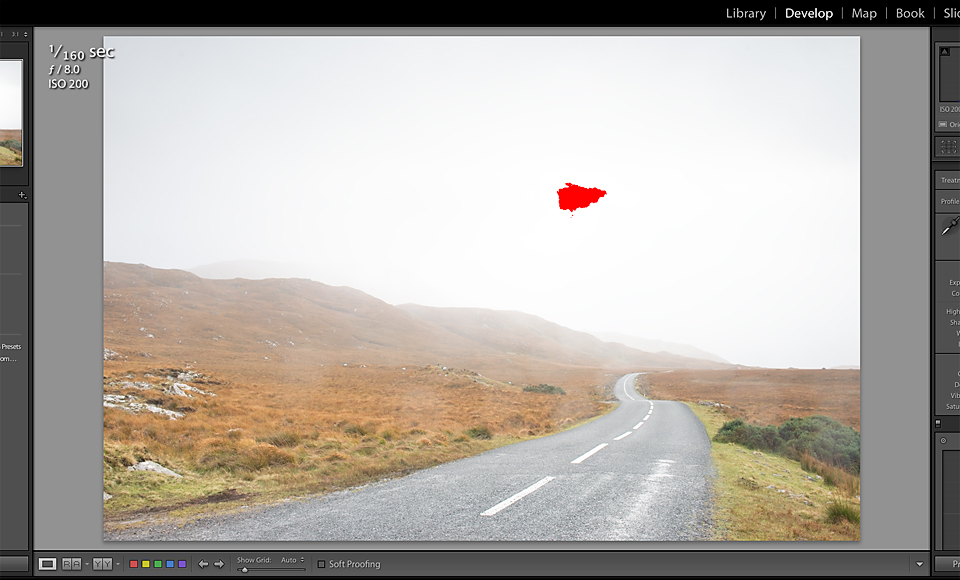 However, as seen in the second shot, you can recover some highlight detail by lowering the exposure slider and also the highlight slider. You can also pop a little light into the shadows by using the shadows slider. But there is still a lack of detail in the centre sky. It may be tempting to hit the X key and send this to the bin. However, for the moment this shot stays. That doesn’t mean to say that it won’t go in the next round of edits. 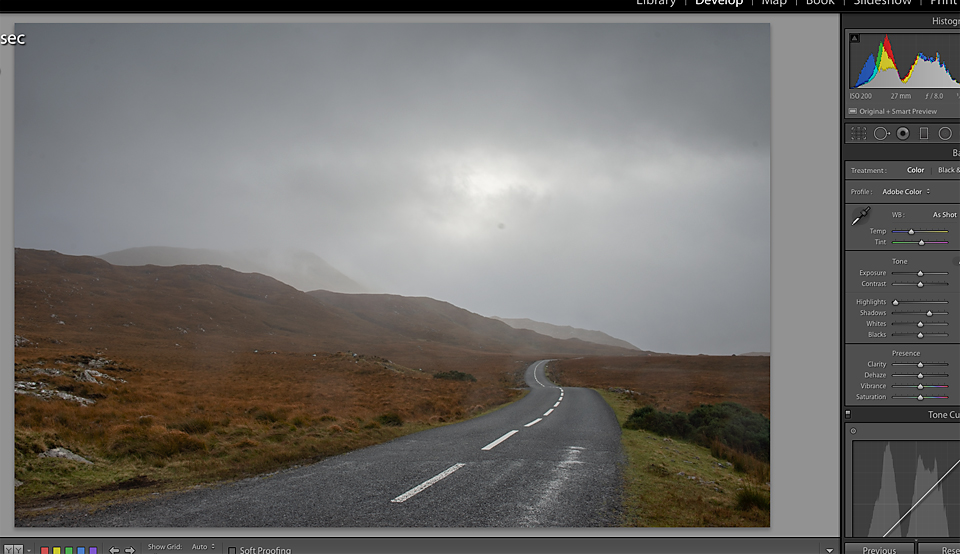 Now I know that photographers, as a rule, are supposed to always slightly overexpose their photos. This is because it is easier to pull detail out an overexposed shot than to pull detail out from the shadows of an underexposed shot.
But I am a sucker for dark images and I often tend to hang onto some of these underexposed shots. I like how they hint at what is within the scene rather than make it glaringly obvious. So I’ll keep the shot below and see if I can make something from it later on. 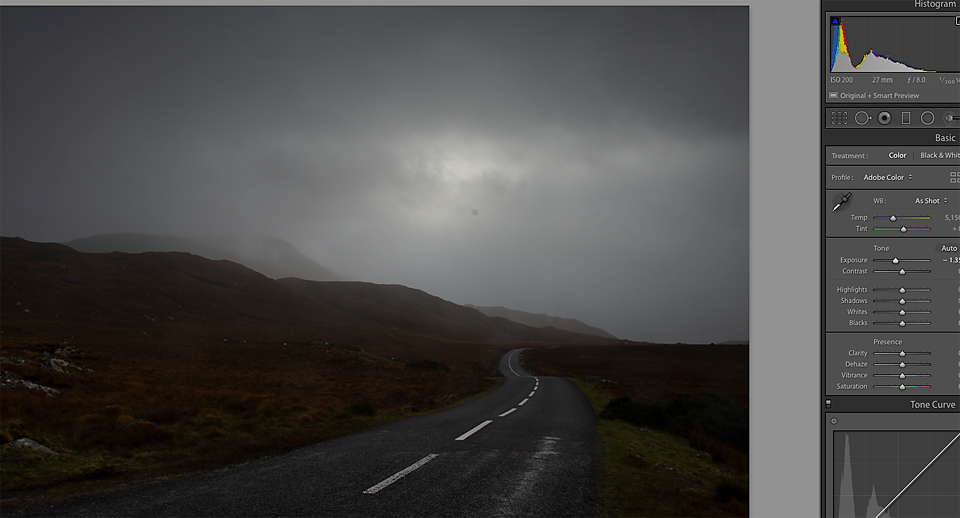 Some images will be underexposed and obviously blurred. So these shots definitely go in the bin. So after starting with 21 photographs and with the first two-minute edit done, we are left with 19 photographs. Time for Step Two.

Edit, Edit and Edit Again
In Step two, we will look for similar photographs and decide which ones to keep and which ones can be discarded.
Here, we have similar images of the same location. They were all shot from the exact same position. They were the very first shots that I took and I was just trying to get a decent exposure. All were shot with similar settings. 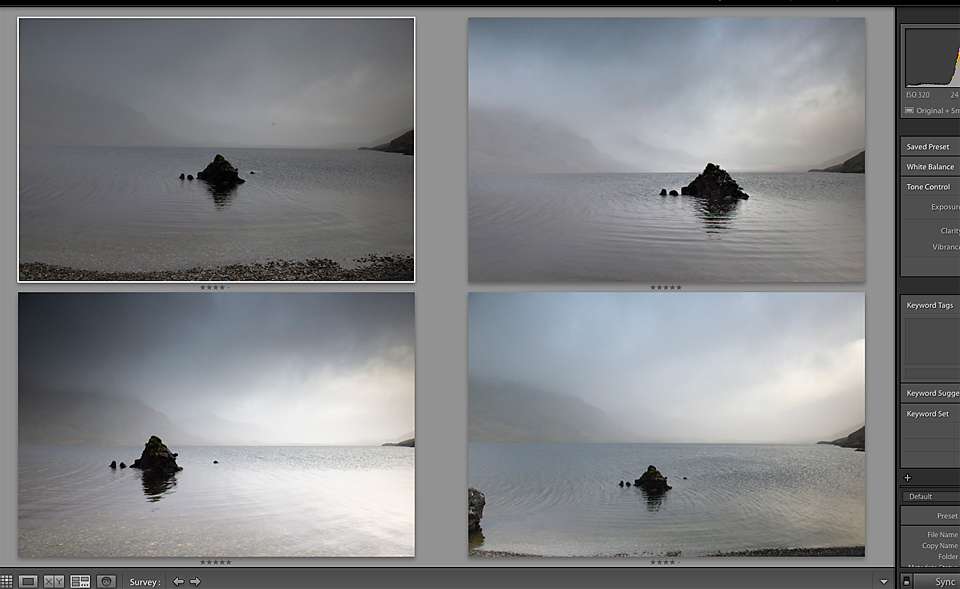 Time to check for sharpness. You should view each image at 100% magnification and check. If you’re unsure, zoom them all to 200% and check more. Because the three were shot using a tripod and remote release, all of them are sharp. During this round, I decided to get rid of the most underexposed of the images.

A quick view at 100% tells me that they are all sharp. All were shot at 1/160 second with only my position varying. I opted to keep the top right image because I preferred the composition.

My Reason For Being Here – Long Exposure
Next up were these three images, again all shot from the same position. This is when I was getting into the longer exposures – the reason I came to shoot here tonight. For these images, I used a Lee ND110 filter (Big stopper). I also used a Lee .9 ND Soft Graduated Filter in front of the ND110.
The image on the top left was shot at F10, 27mm, ISO 160 and 188 seconds – just over three minutes (without the ND Grad). I like it but as you can see, some of the sky is burned out and is unrecoverable. However, as I mentioned earlier, I may be able to blend this image with another to make a better photograph.

The photo on the top right is shot at F22, 27mm, ISO 160 and 16 seconds. Again I won’t dump this just yet as I think it has potential for a nice silhouette.
The image on the bottom is the type of shot I wanted. It’s shot at F22, 27mm, ISO 160 and 199 seconds – just over three and a half minutes. I like the movement in the clouds and this is my favourite of the three here. But for now, I’m keeping them all.

The two images below were also shot from the same position. The light was fading very fast now and we had to keep pushing out the exposure times to capture as much of it as possible. The photo on the left was shot at F22, 24mm, ISO 160 and 406 seconds – just short of seven minutes.

The photo on the right has the same details except the exposure was 815 seconds which is over 13 and a half minutes. I like these two shots and I’m not ready to get rid of them in this round.

These last two shots are taken from different positions. The shot on the left is taken at F22, 24mm, ISO 160 and 327 deconds – five and three quarter minutes.
The image on the right is the last shot of the evening. The light was all but gone now. Details are F11, 24mm, ISO 160 and exposure time of 1382 seconds – just over 23 minutes. Again, these two images are staying for now.

So after Step Two that has taken about three minutes, we have deleted eight images and have eleven left.

Edit Ruthlessly – One Last Time
Lastly, one last quick scan has thrown up three more images that need to be deleted, so now we are down to eight images. It’s not too many to keep so now I will go to Step Three – naming, rating and key wording the photographs. All of the images left will get a three star rating. I may upgrade a few to four star – these will be the images that I will come back to edit in Photoshop.
The important thing to remember is to edit, edit and edit ruthlessly again. This way you are left with what you deem to be the very best images.

Keywords are added to all the images. In this case, all will get the word, “belmullet” and “boat”. while the long exposure shots will also be keyworded with “long exposure”.

Some, like these two will be colour coded. This is because I may blend these two shots together to give me an image that I like. For instance, the detail in the boat in the brighter image could be added to the darker sky in the image on the right. I won’t know for certain until I get them into Photoshop.

So basically, that’s my current workflow … or at least, part of it.  After this comes the editing of the photographs. I will cover more about this in a future post. For a little taste of my editing process, you can see here.
Thanks for reading this far. If you have any questions, just ask in the comments.