Try not to get caught up with the type or amount of equipment you have. Many photographers think, “If only I had this or that lens, I could take better photos”. It’s best to remember that great images come not just from having the technical know-how but seeing these images in your minds eye.

I have found that sometimes less is more. It frees you from the decision of what lens to use and instead allows you to think more about what it is you are shooting.

I attended a day long music festival in 2013. It was in nearby Westport and the lineup was pretty interesting. It included Elvis Costello, ABC, Damien Dempsey, Jack L and Alabama Three as well as many others.
I visited the festival website to see what, if any photographic equipment I could bring along. I wasn’t going primarily to shoot but as usual, I’ll try to avail of the opportunity. The website stated that no professional photography equipment would be permitted. Dang!
However, I was determined to record my visit here. So, I equipped my camera with the smallest, and cheapest lens I have – the Nikkor 50mm, F1.8 and carried it on a discrete wrist strap. Hopefully, it wouldn’t attract too much attention. 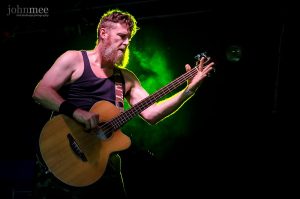 As it turned out, nobody took any notice of me or my camera on the way into the concert. What made it even worse was, I met loads of other photographers there that were carrying their entire arsenal of gear.
I  bumped into my mate, Tony who had three cameras and a huge selection of lenses.
And here was me – stuck at the one foal length – 50mm!
As it turned out, that day I learned an important and overdue lesson. I learned that while technology is important, sometimes we can have too much of it!
Being restricted to one focal length meant I had more time to concentrate on “getting the shot”. Previously, I would have thought about changing to different lenses to get another “angle” on the shot. Doing this could have led to missing the shot altogether.

To photograph something like a live band, you need to be in the moment. You need to be a part of the experience. Thinking about changing lenses and actually changing them takes you out of that moment  – that “decisive moment” as Cartier-Bresson would say. 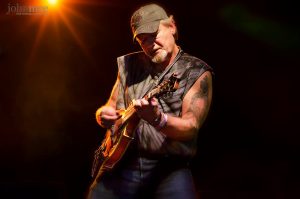 The fact that I could shoot at F1.8 also meant that it was possible to capture some good images in the low light. And that aperture also allows for some creativity too.

After that day, I decided that occasionally I would restrict myself to one lens for some photoshoots.
This will force me to really think about the scene and what it is, that I want to capture. As photographers, we all need to think less about equipment and more about what we are trying to convey and more importantly, why.

Feel free to ask a question or leave a comment below.