Photo composition describes the placement of objects within a photograph. A good composition will help to balance an image and allow the viewer to stay with the photograph longer.

Arranging elements within a photo can be done by actually moving them. A good example of this is portrait or still life photography. Some genres like street photography do not allow the photographer to move the subject as they are quite often in a state of constant movement anyway. In this case, the photographer will have to wait for these subjects to enter the most suitable position within the frame.
Another way of arranging elements is by changing your own position. In this way, we can guide the viewer’s eye towards the most important aspect in the photograph.
With that in mind, here are some compositional ‘rules’ to show you how to make the very best of the scene in front of you.

Take a little time to practice each rule and very soon you’ll learn to spot situations where they can be applied. While it’s important that you know at least some of these rules, it’s also important to know when to ignore them. So feel free to experiment and remember that sometimes, an image will just look right without the application of any rule. 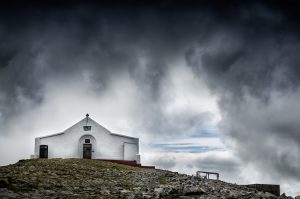 The rule of thirds involves mentally dividing up the scene using 2 horizontal lines and 2 vertical lines, as shown here in this photo of the church at the top of Croagh Patrick. You should then position the main element in your scene along those lines or at the points where they meet. The thinking here is that an off-center composition is more pleasing to the eye than one where the subject is placed right in the middle of the shot.

Display the framing grid on your camera to help with this. See here. 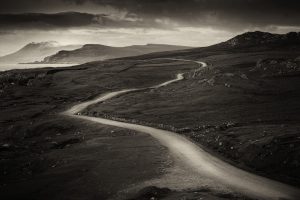 You can use lines to control the way the viewers’ eyes move around the picture. Leading lines are lines within an image that leads the eye to another focal point in the image. Curved lines like this road on Achill island can lead the viewer on a journey around the frame, leading you towards the main subject. Objects such as fences, bridges, roads or a shoreline can act as leading lines. You can use leading lines in conjunction with the rule of thirds. 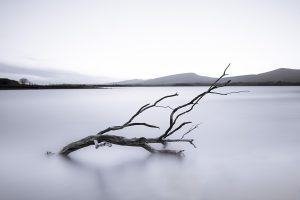 When we look at a scene with the naked eye, we can quickly pick out individual points of interest. But the camera doesn’t see like we do. It will capture everything in front of it. This can lead to cluttered images with no clear focal point. What you need to do is choose your main subject and select a viewpoint that gives it more prominence in your photo, like this branch on the shore of Lough Beltra in Glenisland. Scan around the edges of the viewfinder to make sure there are no distracting objects encroaching on your scene. Move the camera, or yourself in order to take them out of the composition. Sometimes, you won’t be able to keep other objects out of the picture, so try to keep them in the background or make them part of the story. 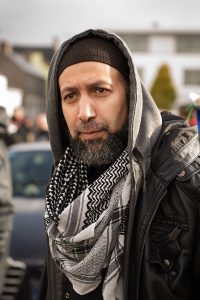 When you’re shooting a scene it can be hard to know how big your main subject should be in the frame, and how much you should zoom in. Leaving too much empty space in a scene will make your subject look smaller than it needs to.
To avoid this you should zoom in to fill the frame, or get closer to the subject in question. Zooming in closer to your subject will flatten the perspective and squeeze the scene together. This will make it easier to control what is in the background, Similarly, moving close will help to focus the viewer on the photos main subject. This technique worked very well when shooting Mustapha from The Olive Tree.

Rule 5: Aspect Ratio
Many photographers get stuck in the habit of taking all their photos with the camera held horizontally, in landscape mode. Try turning it to get a vertical shot instead, adjusting your position or zoom in tighter to get a different view of the scene. You can also improve the view by cropping the photo later. Try using a different cropping ratio, such as panorama or square. I have a short video on photo cropping here. 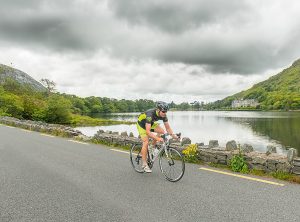 Horizontal lines give a photo a calming feel, while vertical lines suggest strength and stability. Look for diagonal lines, as in this shot of cyclists at Kylemore Abbey to introduce a sense of dynamism and movement. You can do this by experimenting with different focal lengths (zoom in or out) or as suggested previously, moving your position. Using a wide-angle lens and varying your position can lead to great compositions when shooting lines. 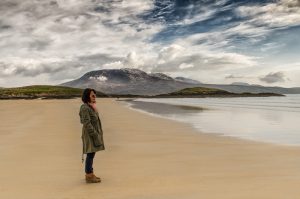 Even though photographs themselves are static, they can still convey a strong sense of scale and space. If the main subject of your photograph is moving or looking into a particular direction, leave space for your eye to wander into that direction.
For example, when you look at this photo you tend to follow the persons gaze as they look out to sea. I have left a space for them to look into. There should always be a little more space ahead of the subject than behind it.

Rule 8: Backgrounds
As well as watching your main subject – keep an eye on what’s happening in the background. You cannot always exclude the background, but you can control it. For instance, when shooting a subject make sure there are no distractions behind them like pictures on a wall or ornaments. Move around or zoom to exclude them.

Rule 9: Breaking the Rules
As important as these rules are, it is equally important to know when to bend them! It’s when you understand the rules of composition and then choose to break them that unexpected surprises start to happen.
It’s often best to break one rule at a time. Just remember, for every rule above there are many great images out there that proves you can quite often disregard them and still produce an engaging picture.

The photo at the top of this article shows a field of barley between Balla and Claremorris. Can you see spot what rules were used when composing this?

Starting at rule number one, take some time to work your way down through them. Try to shoot a few examples of each and see if you can incorporate 2 or 3 rules into the one photo.

Feel free to ask a question or comment below.