Although I regularly hold landscape workshops myself, I also attend some as well. These are mostly off-camera flash workshops. I had previously been to one of Nigel Fleming workshops previously and knew to expect some quality tuition.

This workshop seemed extra special though as it was going to be a Photoshoot at the Ulster Aviation Society. So, as well as shooting some awesome models like Lauren above, we would also get a chance to shoot a few “older” models.

So last Sunday morning, while you were all asleep in your beds dreaming of winning the Lotto and swimming in a pool of marshmallows, myself and Nick set off for the three and half hour drive to the location. The Society is located at the former WWII RAF airfield at Long Kesh on the Halftown Road just outside Lisburn in Northern Ireland. Long Kesh is also known as the Maze Prison, The Maze and the H Blocks. Unfortunately, the prison although now empty is inaccessible at this time.

On arrival, we were met by Nigel and waved past the barrier by security personnel. We pulled up outside two huge hangers just opposite the high walls of the prison. 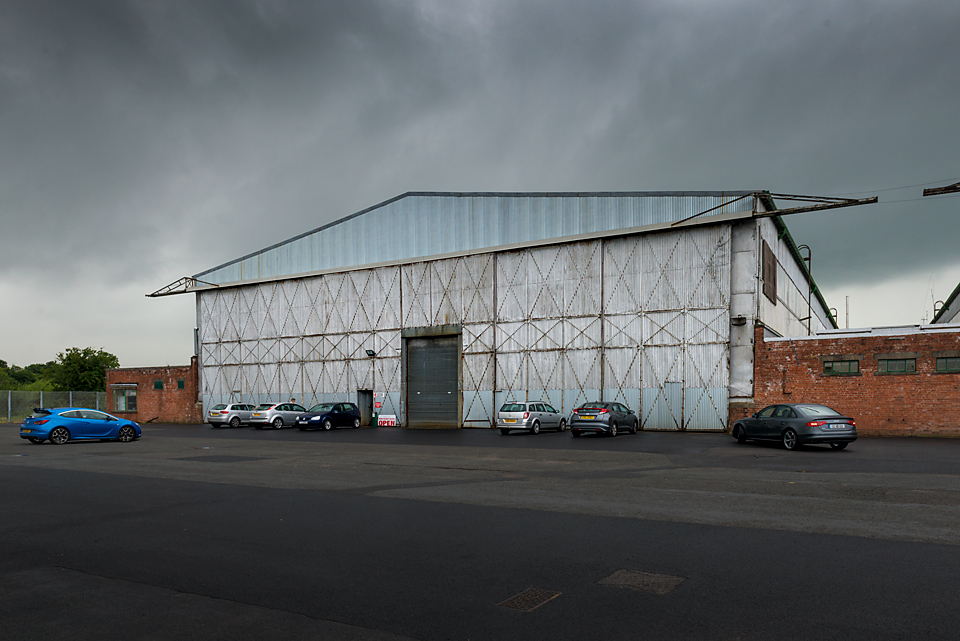 Inside the main hanger, we were greeted by Roy and Mal – two members of the society that volunteer their time and expertise to keep this Aladdin’s cave of technology and history open to the public. My reaction on entering the hanger was “Fuck me – this is brilliant!” ?  Roy and Mal seemed pleased with this and suggested that I leave that on a Trip Advisor review of the place for them.

I’ll write a post about Nigels workshop later but this one will be mostly about this terrific gem hidden away in northern Ireland – a must visit for any visitor to the region. Roy gave us a tour of the facility and it was great to get up close to and learn more about the history of the individual exhibits.
Then it was down to the “serious” work of photography. Here, we recreated the authentic look of a helicopter door gunner. If Aimee doesn’t kill you with her smouldering good looks, she’ll fill you full of hot lead. 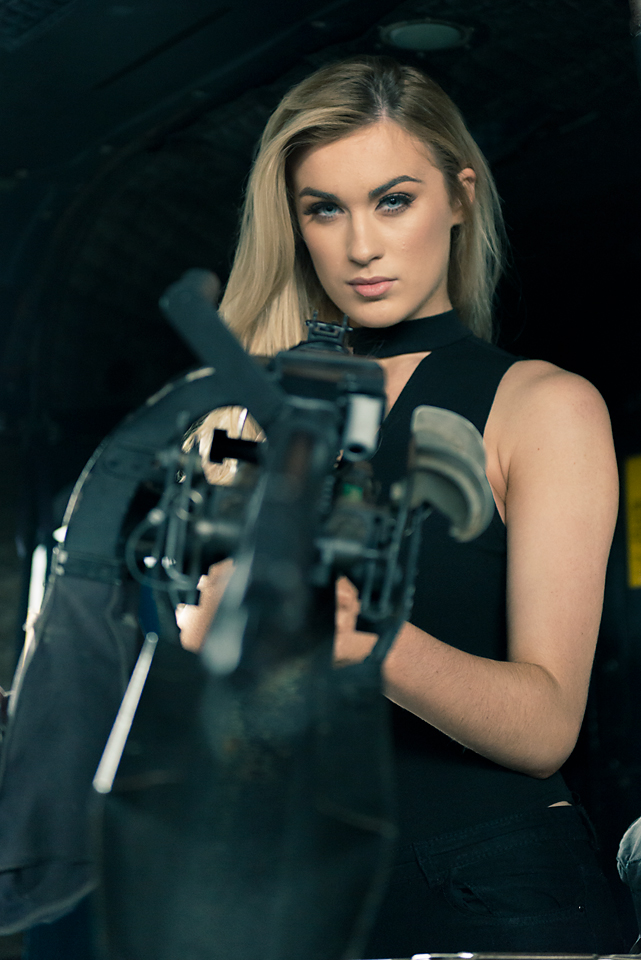 The first serious setup was inside the Puma XW222 helicopter. As with all the exhibits, this is restored beautifully to its original condition and it was great to be able to have a good mooch around inside.
In the snap below, Nick and Nigel are setting up the lights while Aimee makes essential adjustments to her cap. The Puma is a very impressive aircraft and we took quite a few shots in and around it, both with off-camera flash and strobes as well as natural light. We used a smoke machine in many of the shots too.

In between the different setups, I took every opportunity to have a wander around the two hangers and document the various exhibits. A replica of the V-1 rocket, also known to the Allies as the buzz bomb or doodlebug was an early pulsejet-powered cruise missile. The V-1 was developed by the Nazi German Luftwaffe for terror bombing of London during the Second World War. At its peak, more than one hundred a day were fired at south-east England. 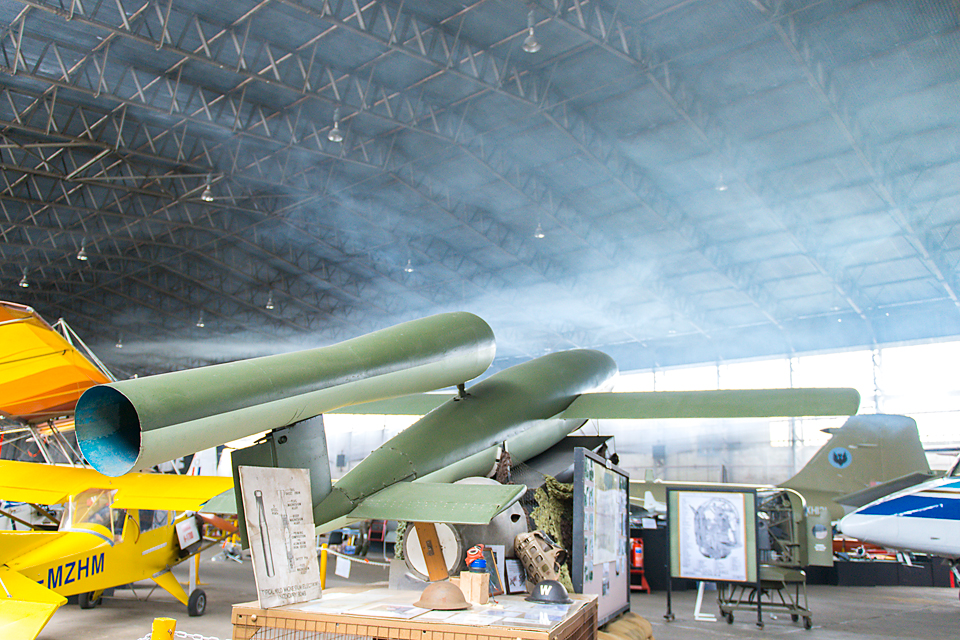 This Royal Navy Hawker Sea Hawk FB.5 WN108 was built in 1954 and entered service in February 1956, embarking on HMS Eagle in April of the same year. It was then transferred to HMS Bulwark and became one of the aircraft to play an active role during the Suez crisis, flying combat air patrols.
This particular craft was saved from the breakers yard and acquired by Shorts for use in their Apprentice Training School. In 1989, it was kindly donated to The Ulster Aviation Society by Shorts. 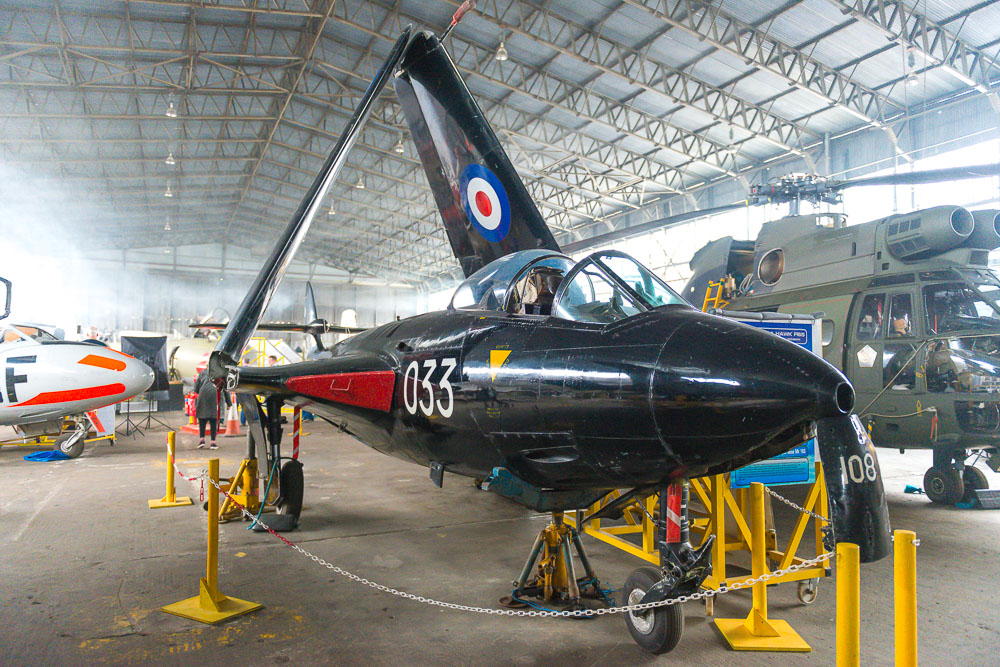 Meanwhile, Lauren and Aimee review their plans to invade Mayo. I suggest we surrender. 🙂 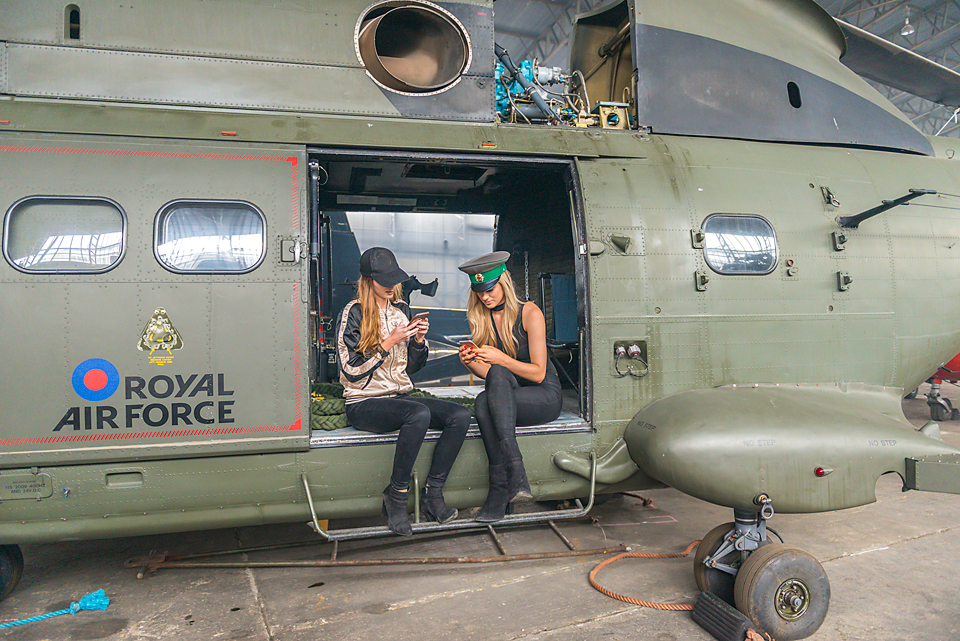 A selection of Martin-Baker ejection seats. James Martin was born in County Down and in 1934, he and Valentine Baker formed Martin-Baker. Martin-Baker investigated ejection seats from 1934 onwards. The company concluded that an explosive-powered ejection seat was the best solution.
Baker’s death in 1942 during a test flight of the MB3 affected Martin so much that pilot safety became his primary focus and led to the later reorganisation of the company to focus primarily on ejection seats. 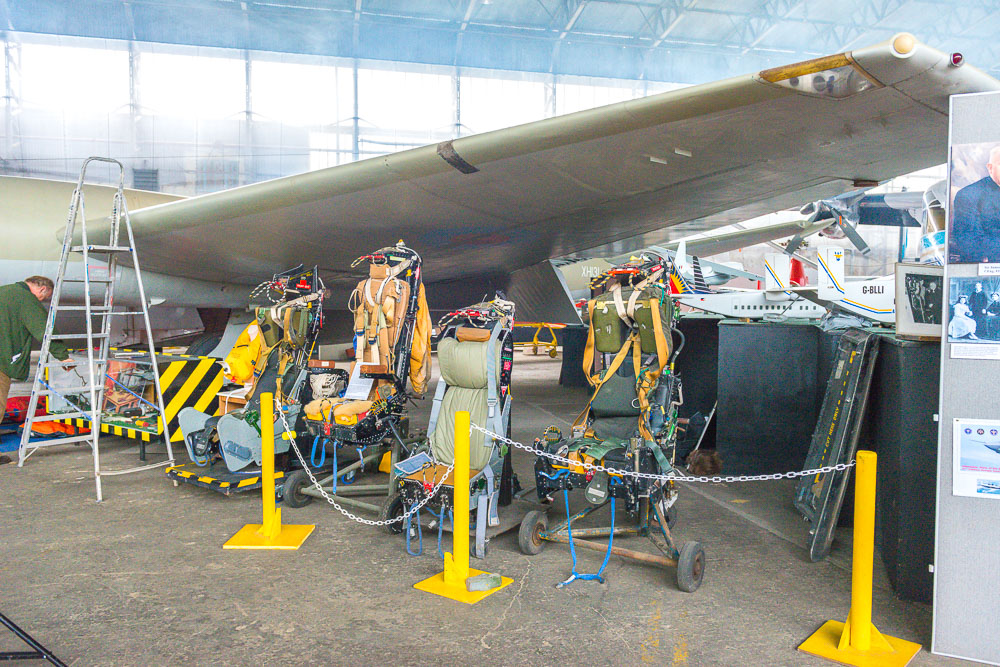 Shiny shiny stuff. If you’ve ever assembled an Airfix model (If you’re under 40, skip this paragraph) you’ll remember how frustrating getting the decals on straight was. Imagine if they were this size.
Still, that Turtle wax really works. Look at the gleam on this! 🙂 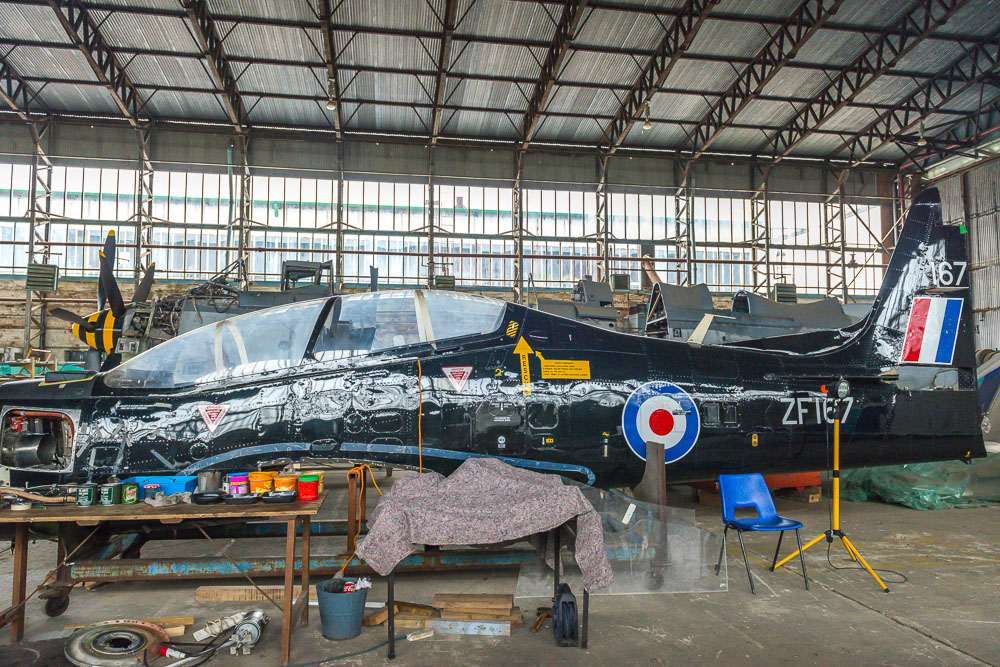 Every now and then, I had to return to the humdrum job at hand. From left to right are, the Short 312 Tucano T.1 G-BTUC, Lauren and Aimee. I love my job. 🙂 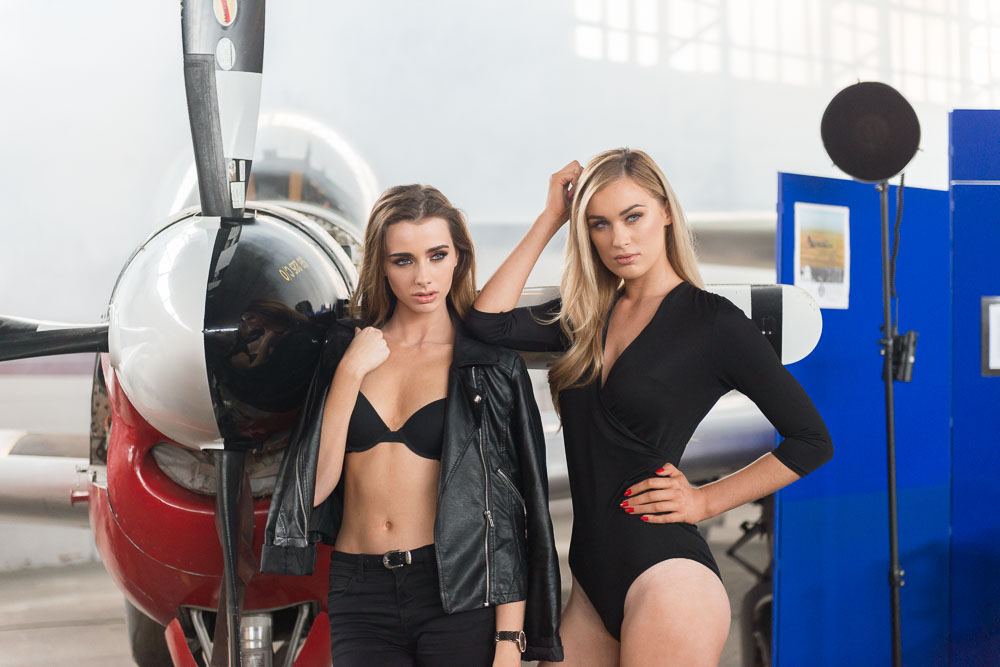 At first, I thought this was some sort of child’s’ toy but it’s actually an early prototype of a flight simulator. The Link Trainer, also known as the “Blue box” and “Pilot Trainer” is commonly used to refer to a series of flight simulators produced between the early 1930s and early 1950s by the Link Aviation Devices. During World War II, they were used as a key pilot training aid by almost every combatant nation. 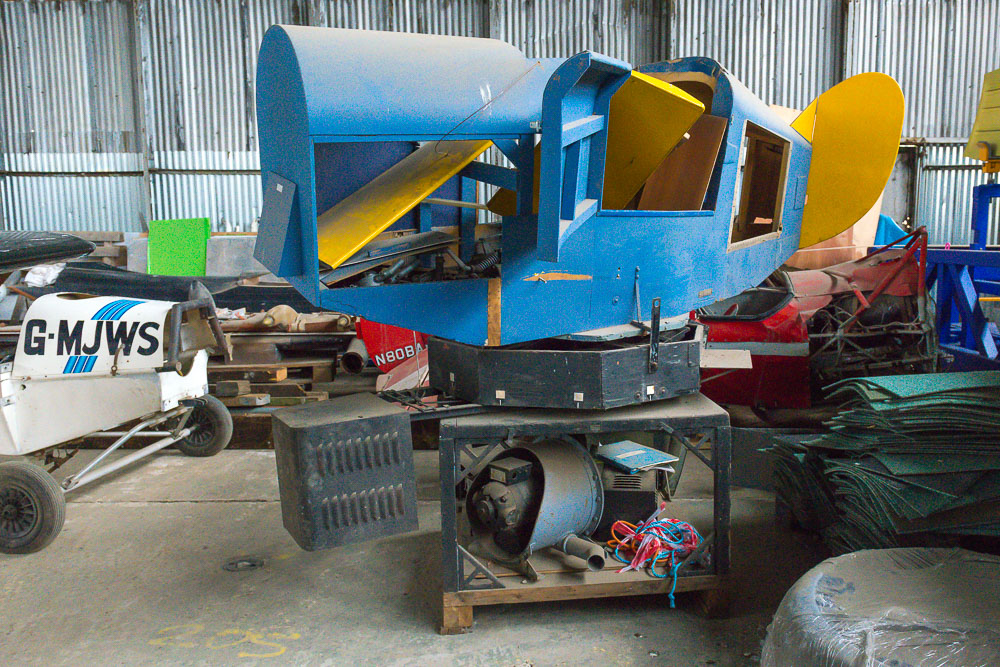 The Fairey Gannet was a British carrier-borne aircraft of the post-Second World War era developed for the Royal Navy. It has a double turboprop engine driving two contra-rotating propellers.
I think one propellor would cause the aircraft to yaw left or right, so a second propeller spinning in the opposite direction was added to counteract this effect. This second propeller could be turned off whilst in flight.
You really have to admire the minds that thought up this stuff. Unlike technology today, this is technology that you can see working. It gives you a real appreciation of the thought, planning and work that went into making these planes operate. 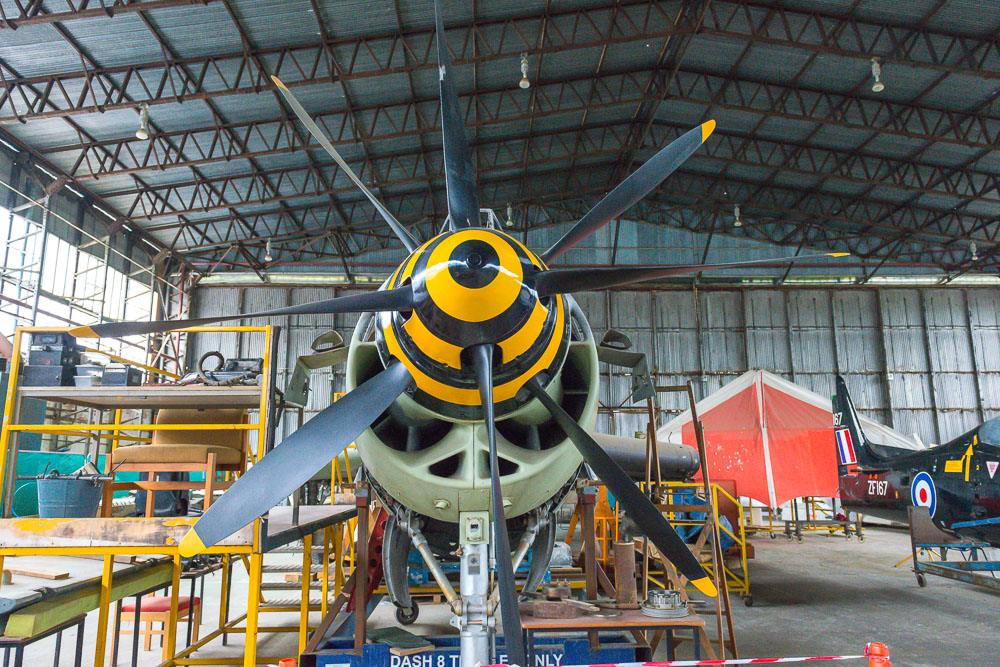 Mmmm, this looks fairly straight-forward. Just cannot find the coffee cup holder. It also looks like it was obviously designed with a male flyer in mind! #subtle 🙂 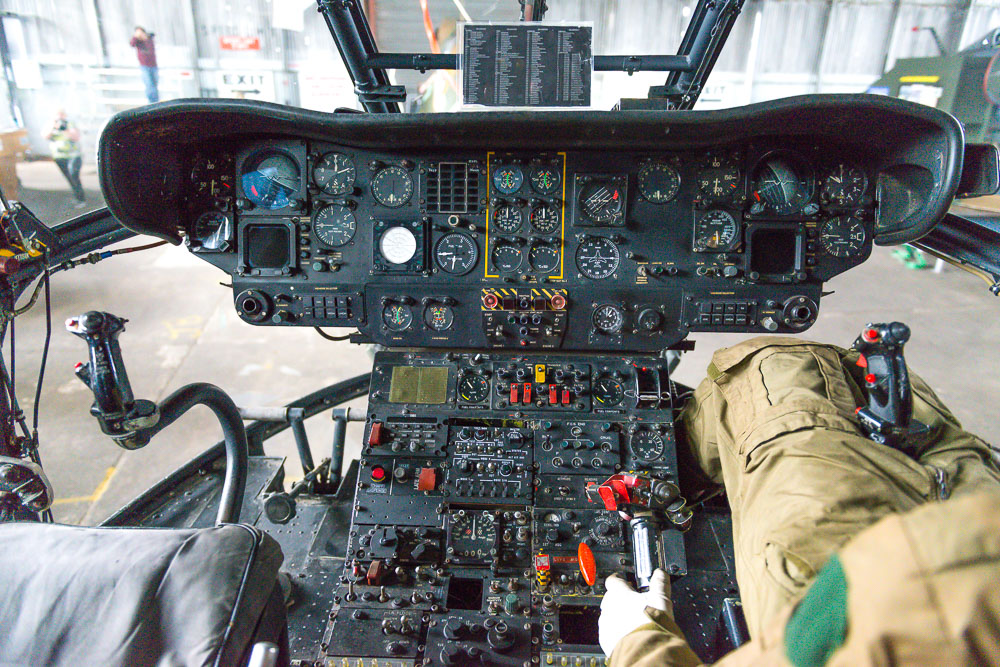 The SA316 Alouette III is a single-engine, light utility helicopter. This craft, Alouette 202 joined the Irish Air Corps helicopter Squadron on the 24th March 1972. During an operational life spanning over two decades, tasking was destined to include such missions as search & rescue, air ambulance, military support operations and VIP flights.
202’s flying career came to an abrupt end on the 20th October 1995, after ditching in the county Donegal lake of Lough Eske, whilst on a joint army and police search operation for a missing man. Fortunately, her crew scrambled clear and 202 was subsequently recovered.
202 was refurbished and repainted by Air Corps volunteers before it was presented to the Ulster Aviation Society by the Irish Government in a ceremony held in the Irish Air Corps main base at Baldonnel on the 27th May 2009. 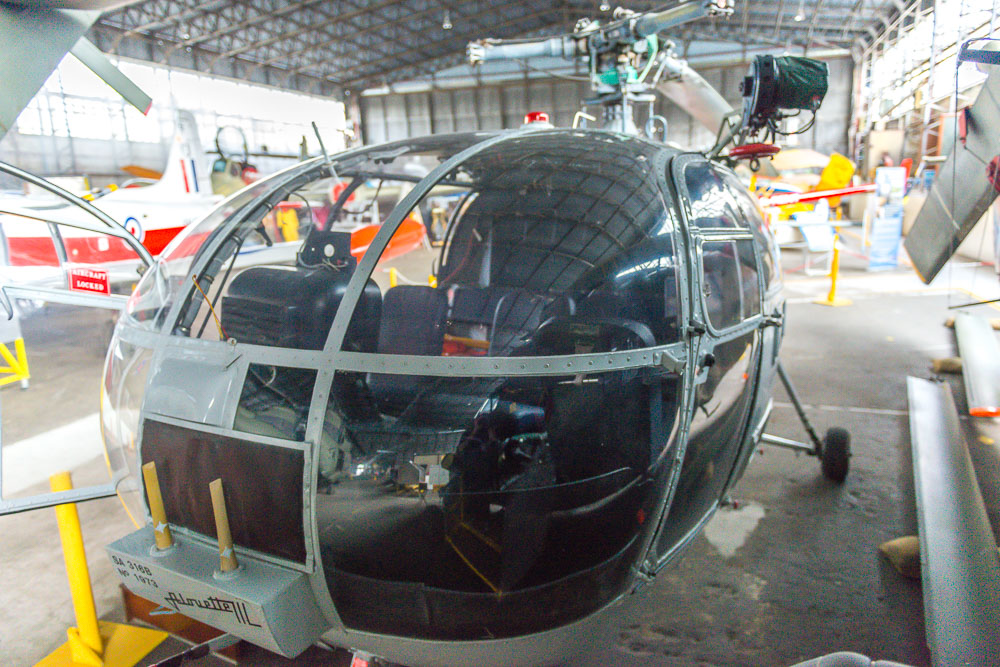 As soon as the siren sounds, the Spitfire pilots would scramble to their planes. Here, one of those dashing pilots heads off to battle the Hun in the skies above our fair and glorious land. The Spitfire at Ulster Aviation Society is an exact replica of the original. 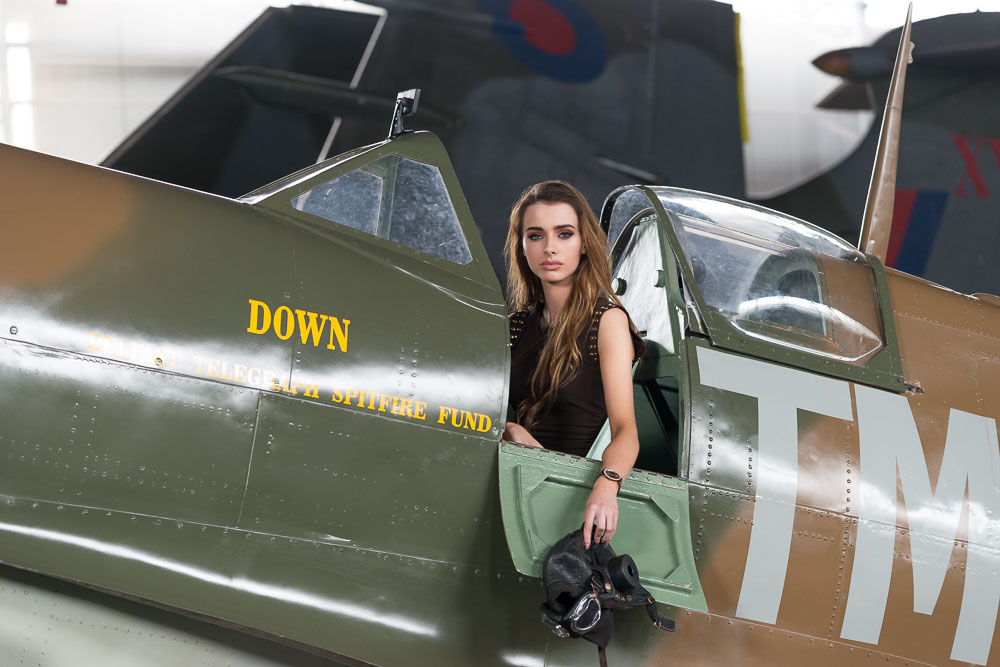 A beautifully restored F.N.4A gun turret. I tried to clamber inside (mentally) but couldn’t see how it could be done. I imagine those guns gave off a fair bit of heat and fumes too. Not much room for a man to spend a few hours squeezed into – alone – up there – all those years ago. 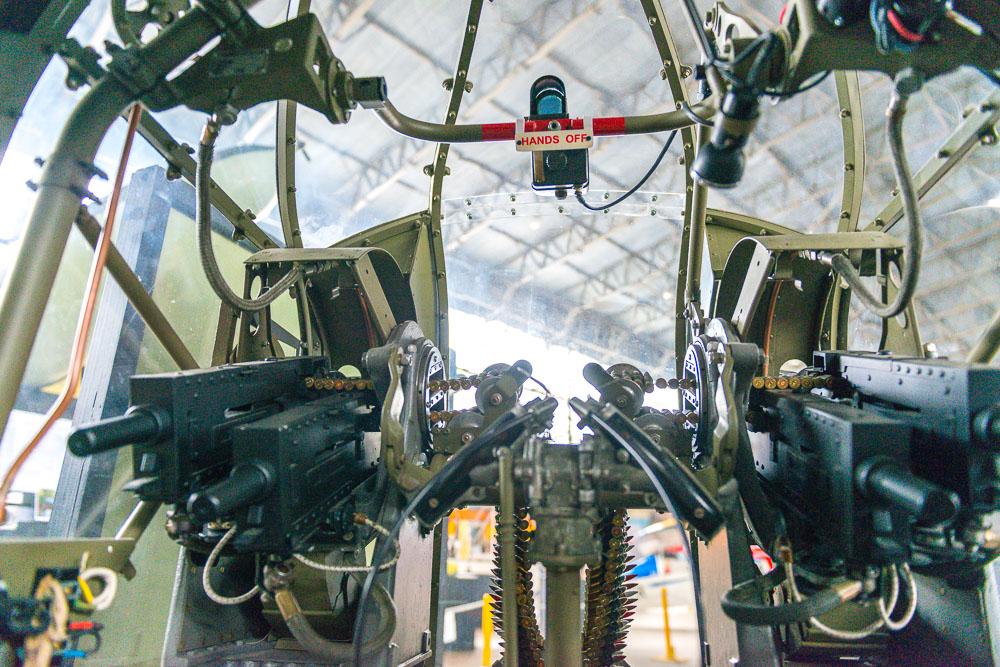 For me, the most impressive exhibit on display was the Phantom F4. The McDonnell Douglas F4 Phantom II is a tandem two-seat, twin-engine, all-weather, long-range supersonic jet interceptor aircraft/fighter-bomber originally developed for the United States Navy by McDonnell Aircraft.
The Phantom is a large fighter with a top speed of over Mach 2.2. That’s over 1674 miles per hour. It can carry more than 18,000 pounds of weapons on nine external hardpoints, including air-to-air missiles, air-to-ground missiles, and various bombs. 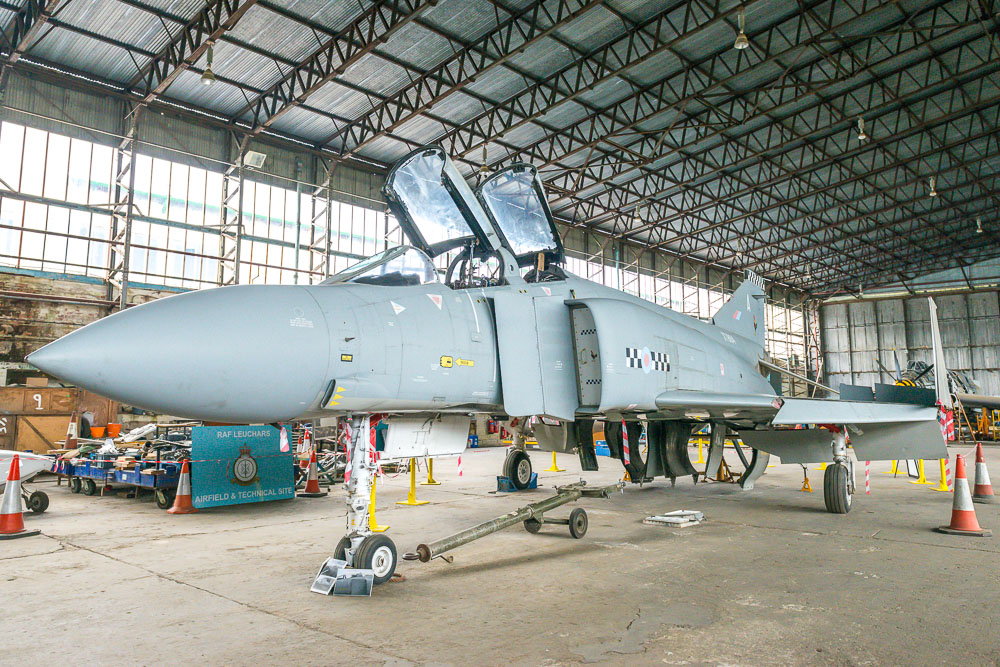 Below is the Vulcan 6-barrel Gatling cannon alongside other missiles that would have been attached to the undercarriage. If you got in the way of this, you wouldn’t be reading here now.

You really need to stand beside or preferably get into the cockpit of these crafts to realise just how big they are. And the great thing about this place is that you can do all of that – with many of the exhibits. 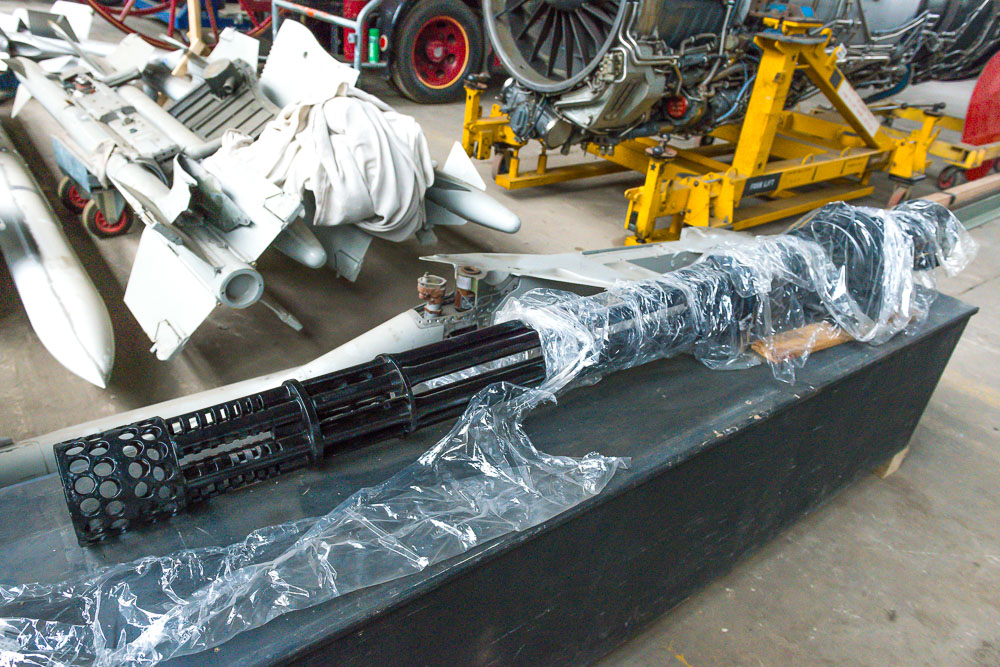 There are lots of these workstations dotted throughout the hangers – evidence of ongoing restoration work. I noticed too that they were meticulously organised.  There’s no doubting the dedication and expertise of the members here. Many of the projects take years to complete. 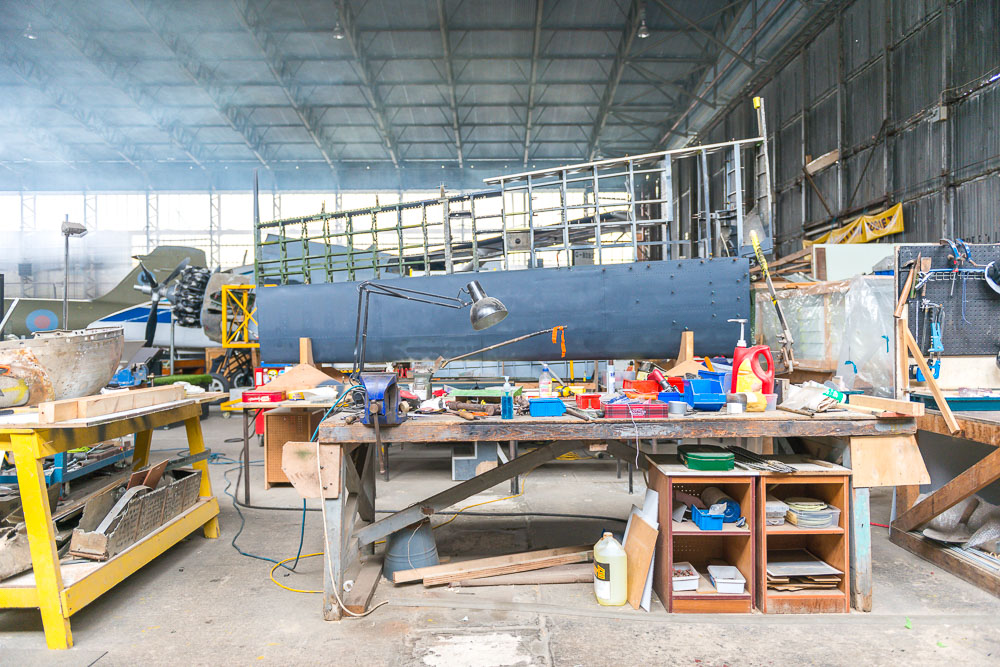 Below: The business end of the Phantom F4. If you’re standing here, make sure you have clean underpants and damn good life insurance. 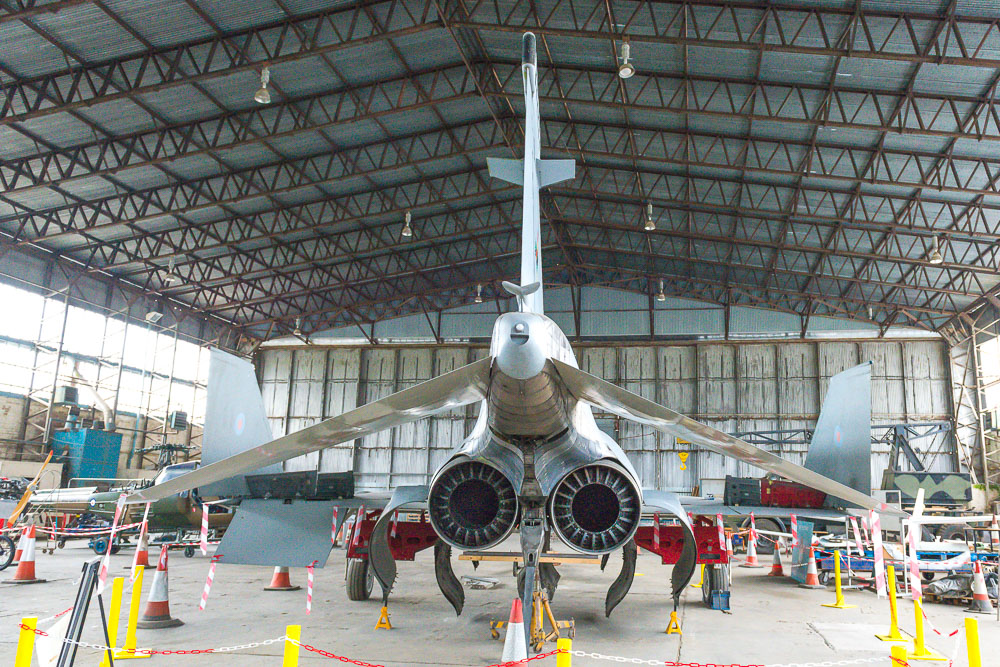 When it was time to go home, Roy and Mal kindly allowed me to take the Canberra PR9 XH131. Here I am, conducting some pre-flight checks. “Tally ho – chocks away – lets’ go”

Conceived as a high altitude unarmed bomber, the Canberra entered service with the RAF in 1951. It was also used as a photographic reconnaissance aircraft.
Throughout the Cold War, the PR.9 flew missions when and where surveillance was called for and in more recent years the aircraft was deployed for operations over Rwanda, Kosovo, the 2003 Gulf conflict and Afghanistan in 2006. 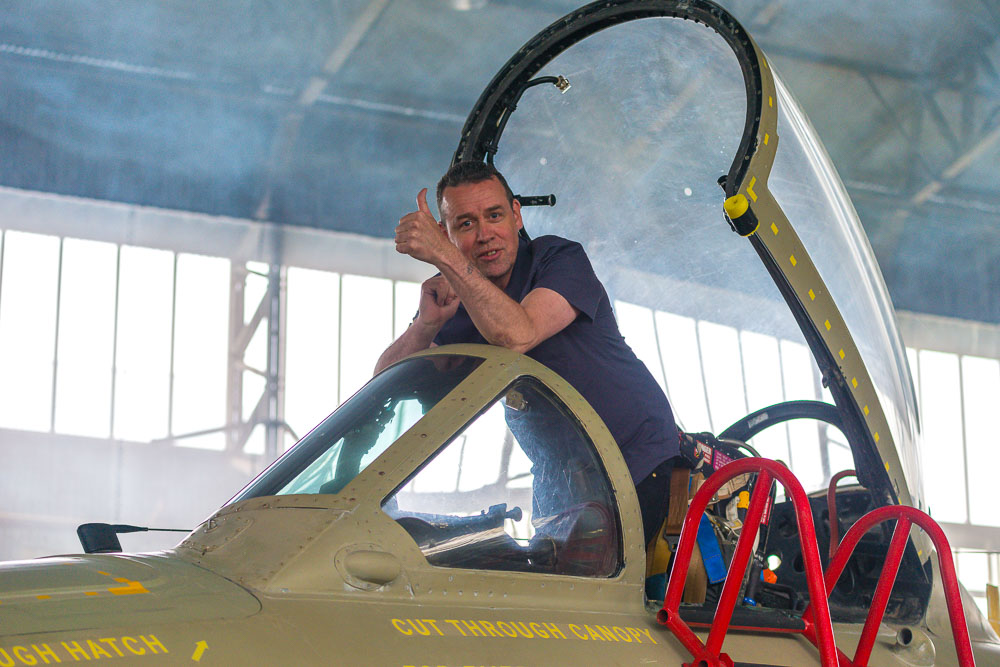 Below: The Canberra PR.9 incorporated a hinged nose for access to the navigators’ station which now included an ejection seat. This would be handy for dropping Nick off at Turlough on the way home. 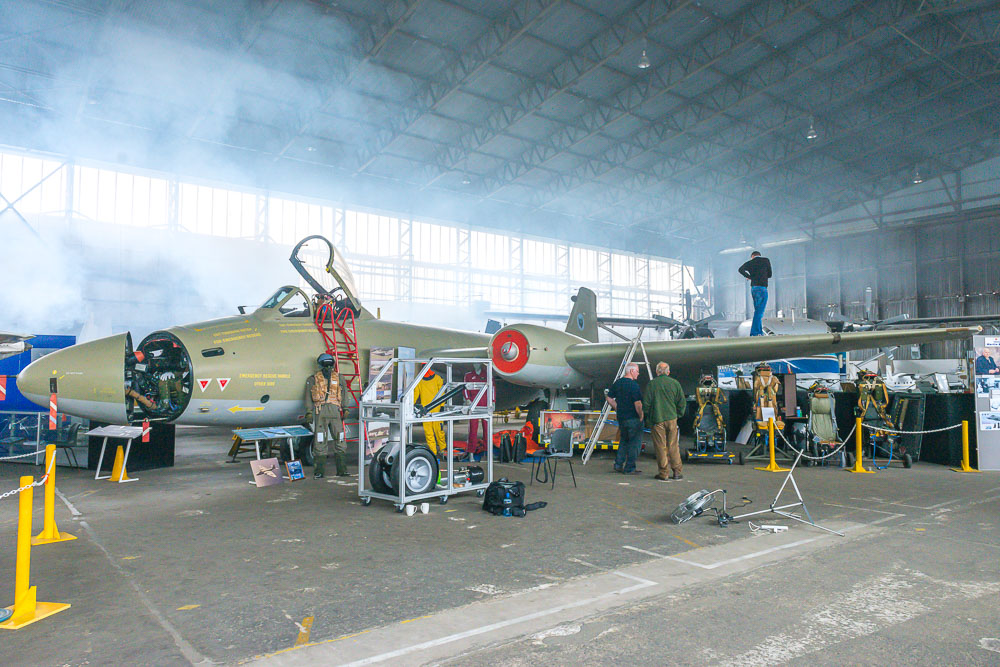 After all my exploring around the Ulster Aviation Society, it was time to return to the job at hand – some regular photographic stuff. #yawn 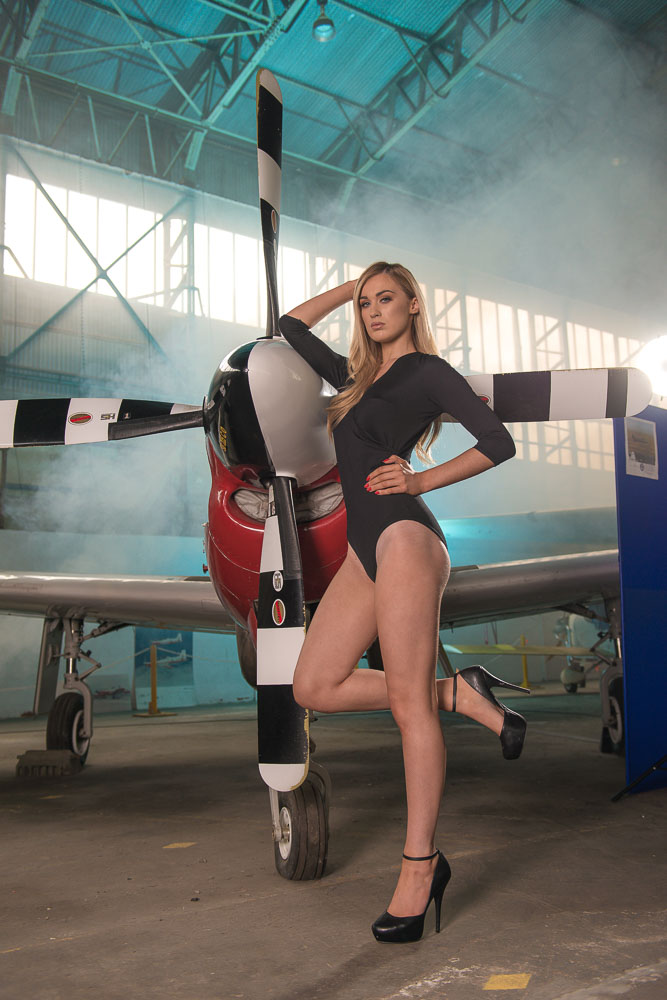 Anyway, if you’ve read this far – thanks. And if you ever find yourself within 90 minutes drive of this place, do yourself a favour and visit it. I have only really covered a small selection of the exhibits here – there is so much more.
Although the site and hangar are not open to casual visitors they are able to facilitate pre-arranged group visits to the collection.
Check out their website here or their Facebook page here. This place is definitely worth a visit. Be warned, Aimee or Lauren may not be there when you do call in.