Return to Afflecks Palace and 1989

It’s quite a few years since I visited Afflecks Palace – more than I care to remember. It’s an alternative clothing/lifestyle shopping emporium in Manchester. On a recent visit to that city, I decided to take a trip down nostalgia lane to see just how rosy life was back then.

Of course, the exterior of the building hadn’t changed at all so that bode well for my return. Would I come back outside bedecked in tartan trousers, spiky hair and some new piercings? Would this be a return to my younger days or a descent into a mid-life crisis? Oh YEA, another one! 🙂

The view of the exterior offered much – a tall Babel-like tower s-t-r-e-t-c-h-i-n-g into the sky, filled with windows promising to metamorphose all who entered into superior beings of coolness, street cred, individuality and psychedelic personas. Well, maybe I exaggerate a little. But at the very least, the clothes, accessories and experience would make us as angry as fucking hell – or maybe just as angry as a young punk needed to be in the 80’s. 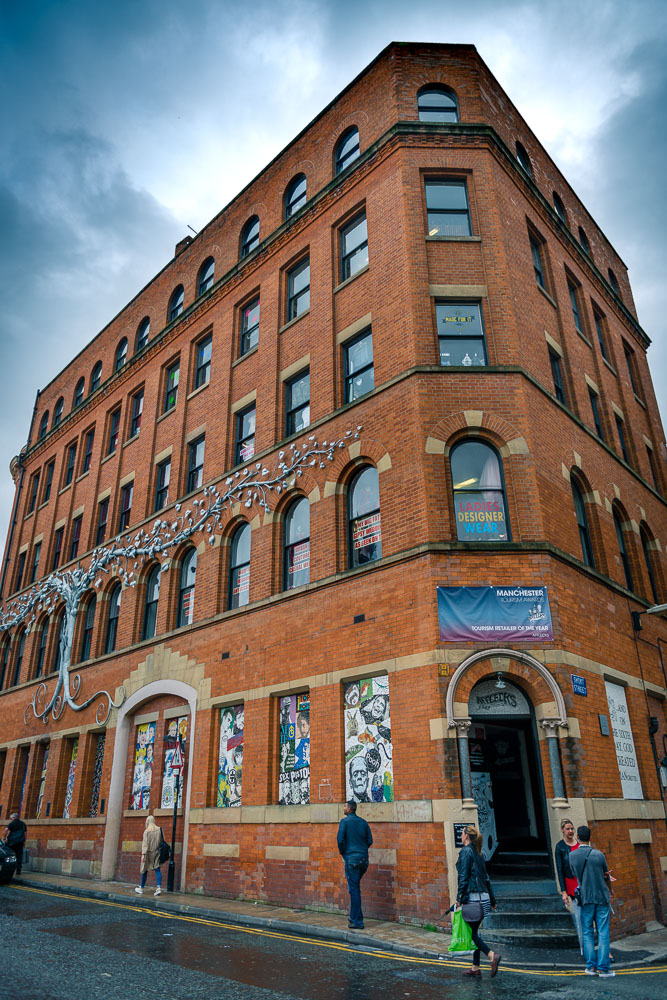 However, if the many intolerant people (bastards!) I met during my misspent youth taught me anything, it was that you should never judge a book by its cover. And I guess the same is true of architecture. While it was indeed Afflecks Palace on the outside, the interior was a sort of watered down, homogenised version of the original – hmmm – think – Afflecks Lite. The “edges” were there but time had worn them down a little smoother. 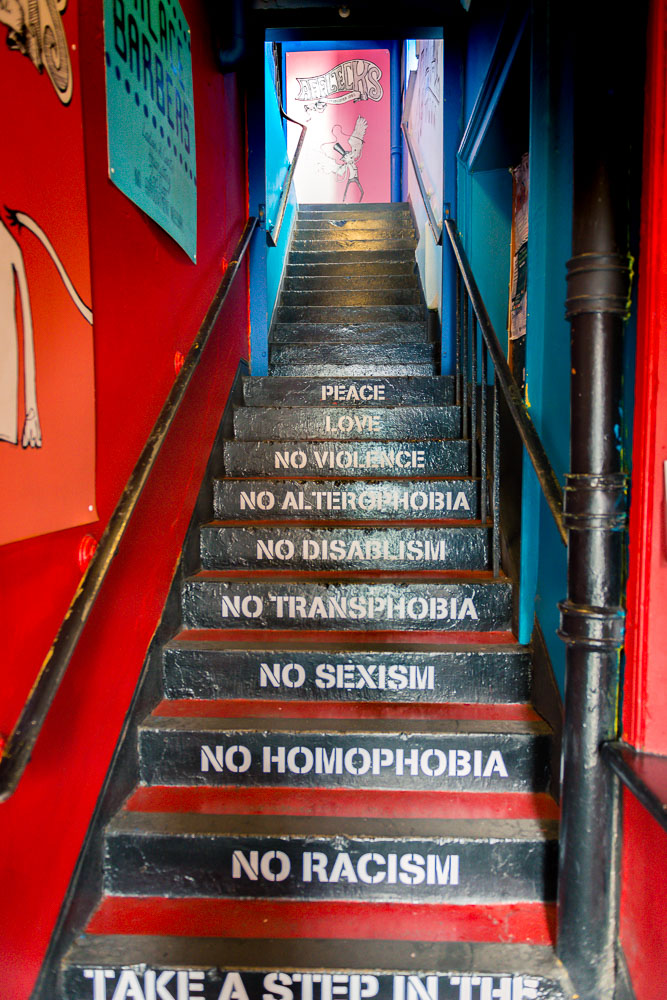 Still, the stairway promised a place of no bullshit and lots of peace and love. So, if you cannot stand confidently on each of these steps, then you’d just better stay outside – or as we used to say back in 1987, you’d just better fuck off! 🙂 I climbed them with the same sense of nervous excitement as I had back in those days.

The shopping experience in Afflecks is a funny one – as in strange – not haha. The familiar pattern that we are used to with high street shopping is dispensed with, as space is at a premium. So everything is kinda topsy-turvy and on top of each other. One minute you can be browsing some vinyl and then could find yourself confronted with a rail of corsets and basques. 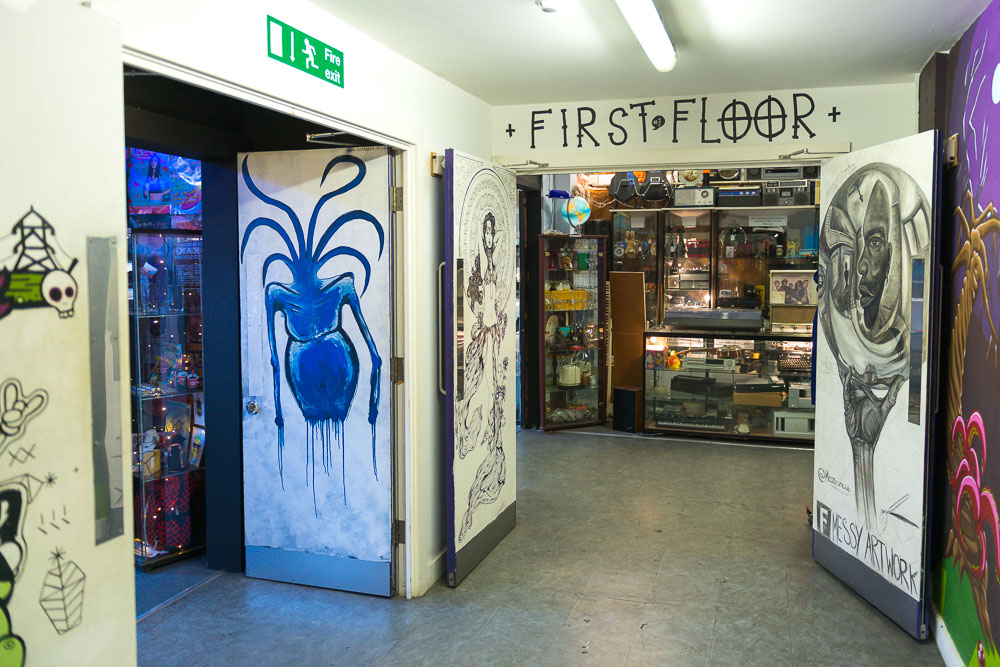 Continuing upwards, I was greeted with this barrage of posters along the staircase. The same scene greeted me the last time I visited. Yea, there were some new posters but many of the older bands were still represented on the walls – Joy Division, New Order, some band declaring Anarchy in the UK, The Cure and The Velvet Underground. Unfortunately, the wall also had posters advertising Michael Jackson and some boy band! Ask someone in 1984 what a boy band was!@/*!! 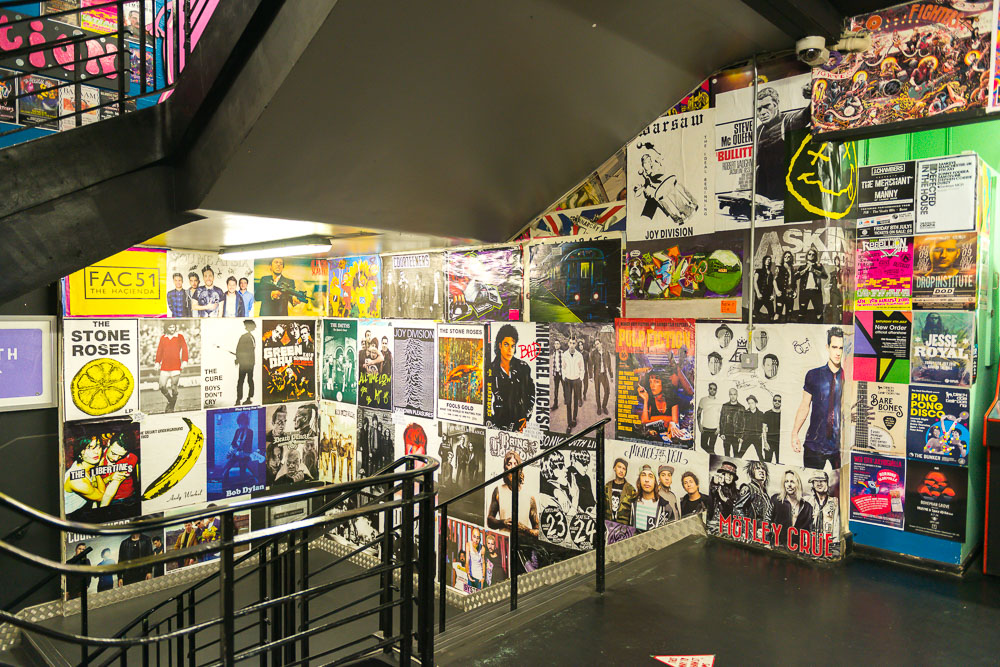 My journey in search of nostalgic awesomeness continued onwards and upwards. As it did for many others. Round and round we went, a bit like Billys fellow inmates in that wheel room scene from Midnight Express. Of course, in the 1980’s there were a lot more Billys than there are now.
Here, there was an equal mix of locals and tourists, the latter looking somewhat perplexed and, for the “way out”.

“Excuse me Sir, could you point me to the exit?”
“Certainly. I believe it’s that 4th floor window over there”

I was kinda surprised at how “ordinary” some of the people here looked. Where was the individuality, the independent thinkers, those who sought out differences, the avant-garde?

Everyone looked just so boring – or as we would say in the 80’s – so fucking boring! Maybe the avant garde were hiding, maybe they were in disguise and as soon as I reached the top floors, the madness would start to creep in and they would lose their loafers and padded jackets. 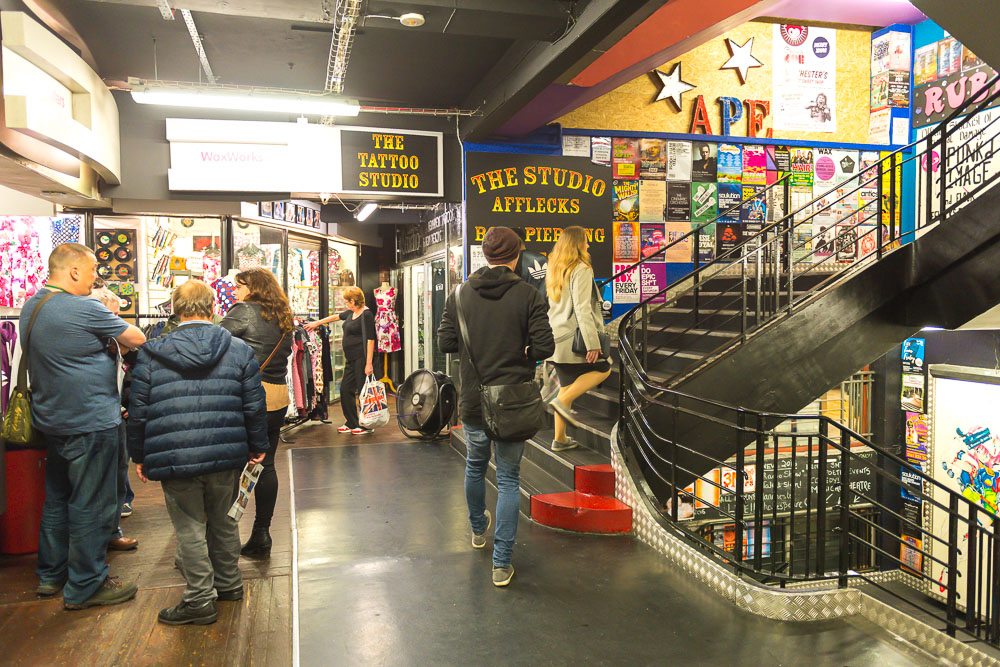 But honestly, by the time I reached the second floor I realised that the Afflecks Palace I knew had long since disappeared – that it was more Afflecks Cabin or maybe Afflecks Two-up Two-down. But undeterred, my quest for some semblance of my lost youth continued – onwards and upwards and upwards … round and round … past the posters … past the people in their padded jackets …

… past the rubber … past the badges. Do people still wear these? (I have 2 – on a jacket that doesn’t fit me anymore) NOTE TO SELF: The diet starts Monday.
These ones (the badges) were mostly of bands/singers I didn’t recognise, quotes that I didn’t understand – oh wait, there one of The Cure, The Flaming Lips, the ubiquitous Peace symbol – Man –  and Pink Floyd. Aaaaghhh – Piiinnkk Flloooyydd. #drools ala Homer Simpson. I continued … 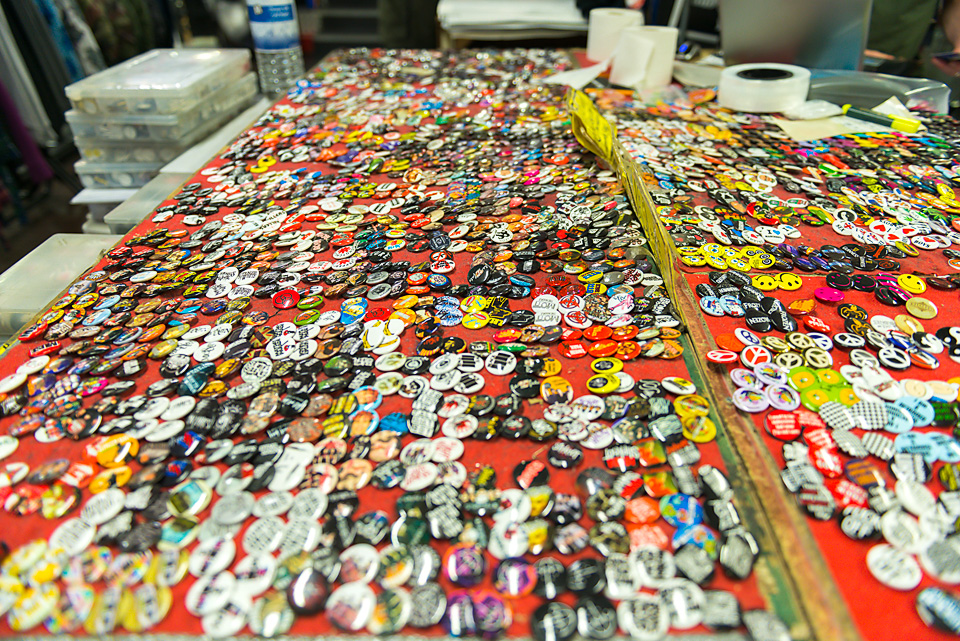 … round and round and up the spiralling steel staircase. Past more posters, past more people in loafers, and onwards towards the black and white portraits of anonymous people that implored us to stop hate crime. Just the hate crime? I guessed they were clients or perhaps business owners in the building, or models or maybe just celebrities. Oh wait, maybe they were ordinary Joes, like me and you or even like the people in the loafers and padded jackets. And then, I caught a glimpse of my reflection in one of the photos and realised that I wasn’t the devil but also, that we don’t need anyone else to tell us to stop hate crime. We fucking know that already! 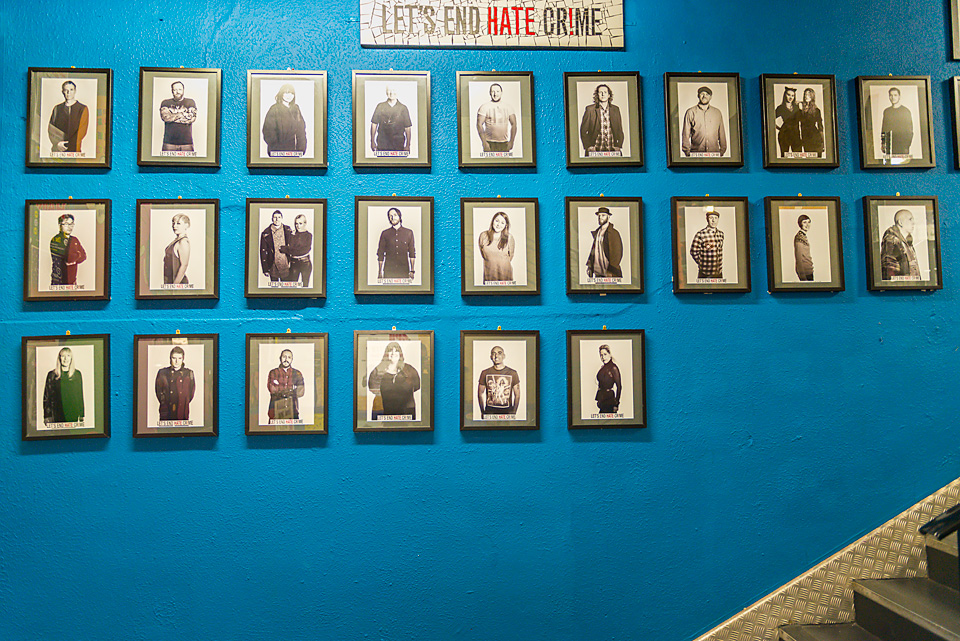 Eventually, I reached the top floor and something resembling the Afflecks Palace that I knew started to emerge. A barber/hairdresser giving alternative haircuts in between all the regular short back and sides and skin fades. 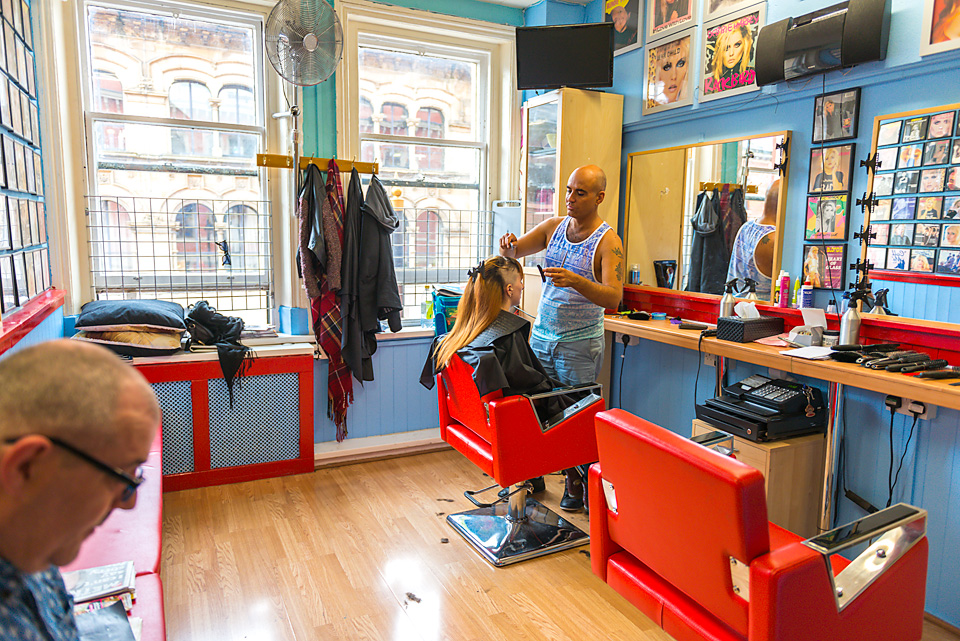 Although surrounded by the warm and shiny trappings of the herd mentality lifestyle, there was still those breaking the mould, reaching deeper inside themselves and pushing what they find into the faces of all the conforming, tracksuit bottom/leggings wearing, loafer and padded jacket brand loyal users clones out there. Wow – that’s a bit of a MOUTHFUL. Calm down John.

And across from them were the shops that sold everything from guitars and pink Docs to flat caps, top hats and aviator glasses  -yes, aviator glasses! One of those shops where you could find absolutely anything … but never quite the item you were looking for. 🙂

… while on the other side of the counter lay these two jackets, adorned with chains, safety pins and bizarrely, badges of The X Factor and an Alsatian dog. WTF – Wild guess here, but these are probably not authentic! 🙂  They were only cool because of the fan in the background keeping them like that.
And anyways, no self-respecting goth or punk ever hung their (unpadded) jacket on a clothes hanger … beside wellies … or loafers for that matter. 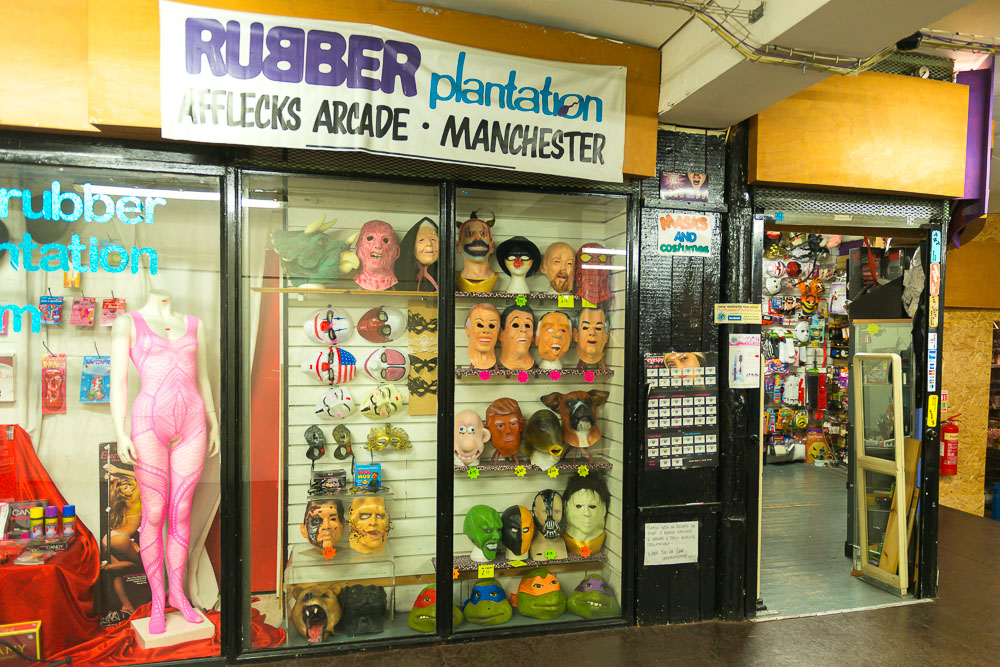 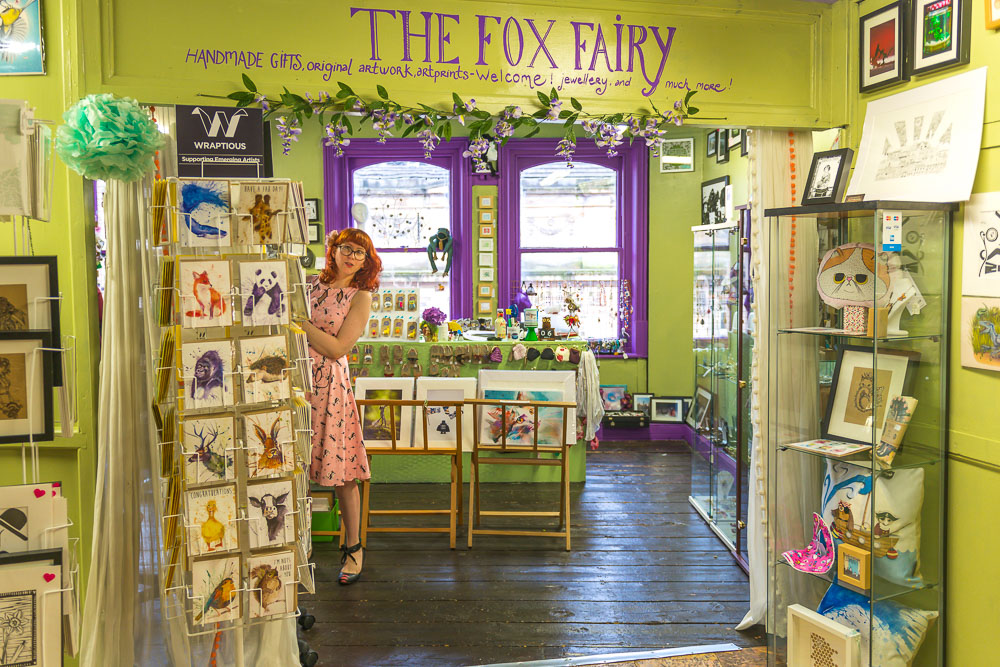 But there were still little gems to be found – like The Fox Fairy. A small store full of lovely and unique handmade items including jewellery, clothing and art prints. Lovely stuff that you keep meaning to buy but never quite get around to. But, lovely stuff all the same.
I like this shot of this quirky girl peeking out from this quirky shop that sells the quirky stuff. I don’t know if she’s the owner, but I think she should be. Anyone know her? 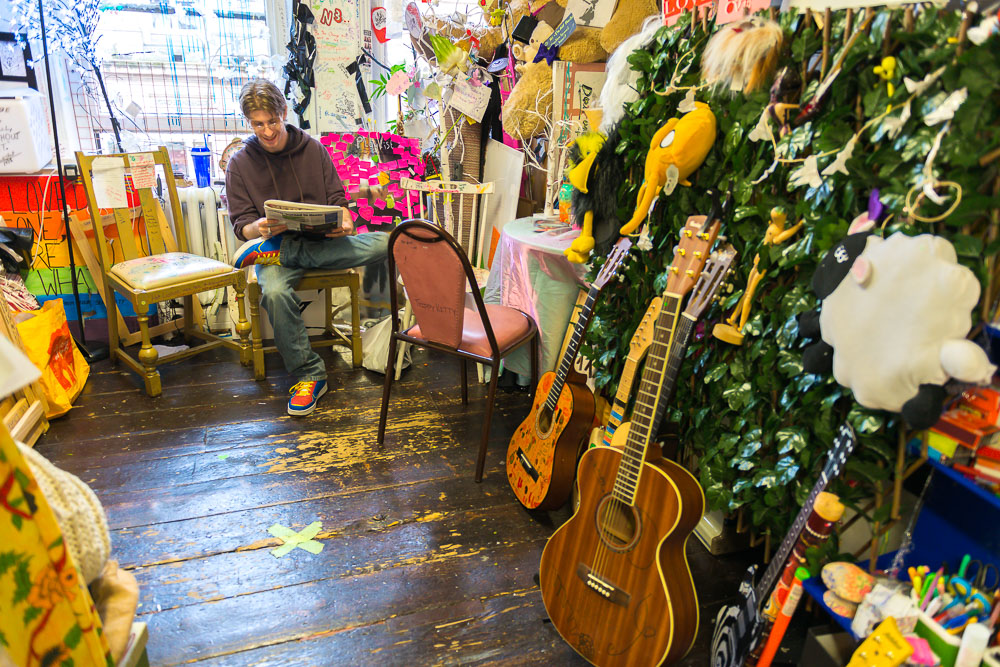 … and this place! I’m not quite sure what was being sold if indeed anything was. But it didn’t matter. I wasn’t buying. He was reading a paper and sitting in a cool position. The auld knees are gonna give him jip tonight though! 🙂 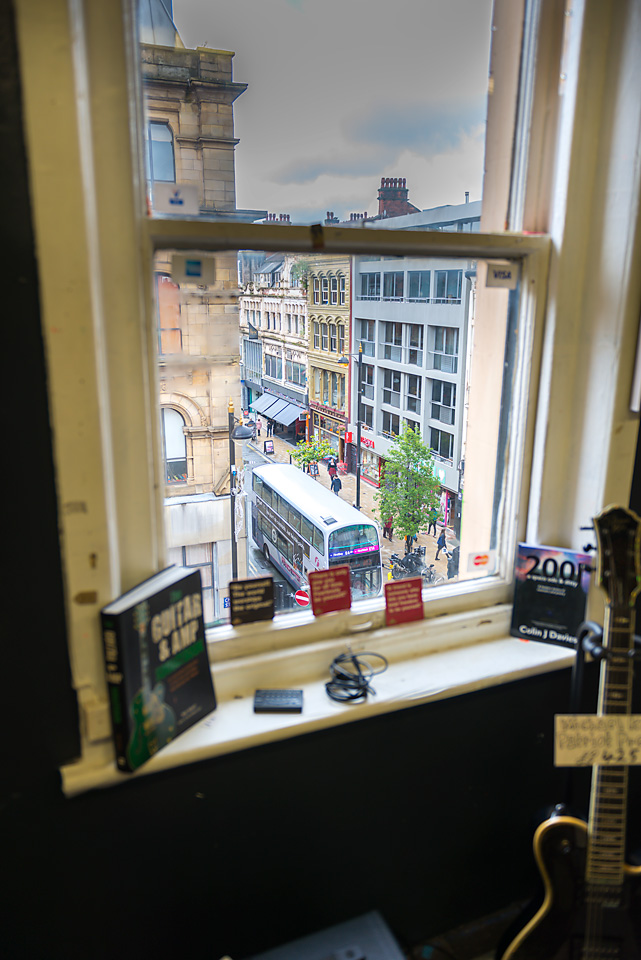 Afflecks Palace was as much about browsing and discovering – discovering places where there was a jumble of bric-a-brac and guitars, discovering fragments of yourself you didn’t know existed, places that had an X on the floor and chairs covered with graffiti to sit on, and fluffy toys with long yellow legs, and post-it notes telling me about strangers like Ruby McCann that loves John, and because … unicorns, and a jelly bean tree and friendly people relaxing and reading and smiling – far above the street below, above all the grey tracksuit bottoms, above the leggings, above the Arndale centre, above the couple screaming at each other, above the drunk sleeping in front of the cafe, above The X Factor, above the sexism and racism, above the brand loyalty, above the people in the loafers and padded jackets, above the rubber, above the hate, above the violence, above the American guns, above racism, above Kim Jong Un, above Donald Trump, above the homophobia, above the city –  just above.

And it made me realise that being alternative was much more than the look, the clothes, the decade or the accessories. It certainly wasn’t about 30-year-old slogans on poxy yellow t-shirts, or Punk’d Image branded carrier bags or haircuts or rubber or chains or pink Docs or badges or corsets or peace or love or where you live or how many times you use the word fuck, or what you are against or what you are for.

… what … whe .. ho… but … but…and … therein lies my dilemma. Alas, I no longer know what being alternative is about. Is it even possible to be alternative nowadays? Is there such a thing? Was there ever?

So, instead of leaving you with some “And Finally” words of wisdom like Jerry Springer would, I’m actually looking for you to tell me some words of wisdom? What you think “alternative” is, and if an alternative even exists?
Humour me – leave a comment, share or Like this post. Thanks for reading and enjoy your evening. Unicorns. 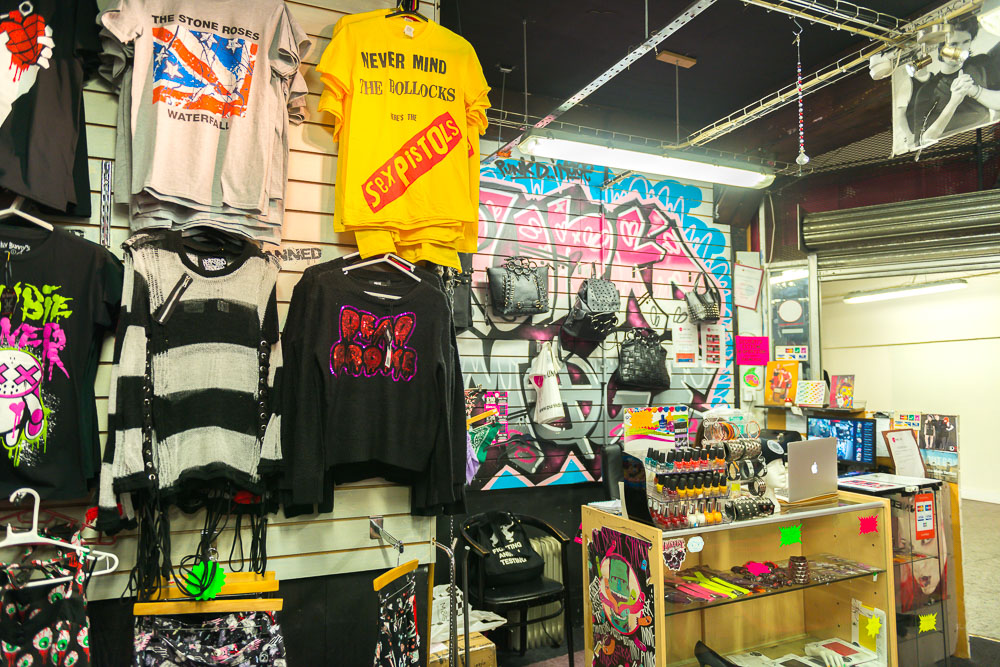 A touch of red