Running with the weather

The weather forecasters had predicted Storm Brendan well in advance. The west coast was under a red warning – this meant wind speeds in excess of 130km per hour. I find Met Eireann are usually quite good at this. Trees can come down and there may be some structural damage to out buildings. Couple this with a high tide and there would be a strong likelihood of coastal flooding. 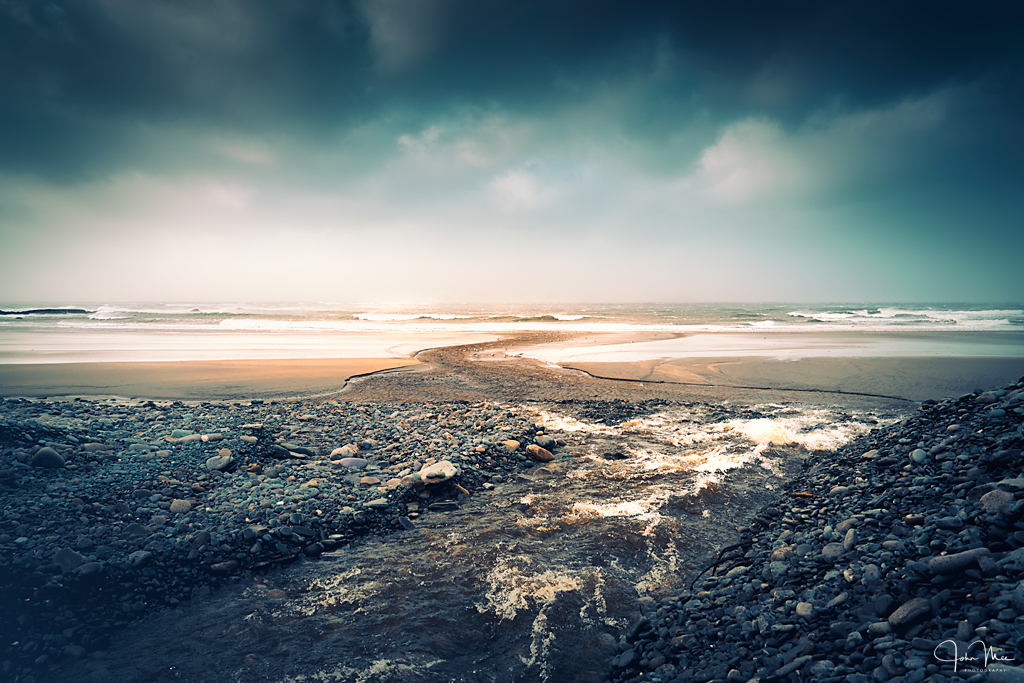 So, Monday came around, I had the day off and I was bored indoors. The wind was beginning to blow up so I checked with some people I know that live nearer to the coast. The weather was windy but not so bad. And the high tide would not be until after dark.

The advice from the experts is to stay away from the coast and to stay indoors if you don’t have to be out. This is good advice and should always be heeded. If you are going to head out, then check all forecasts, prepare and let people know where you are going. Stay away from anywhere that could be dangerous.

So, with my camera gear packed up I drove down towards Devlin – my favourite bit of coastline. When I got there, it was pretty windy but not dangerous. I spent some time wandering around the beach and taking some snaps – all the time trying to keep the camera as steady as I could. 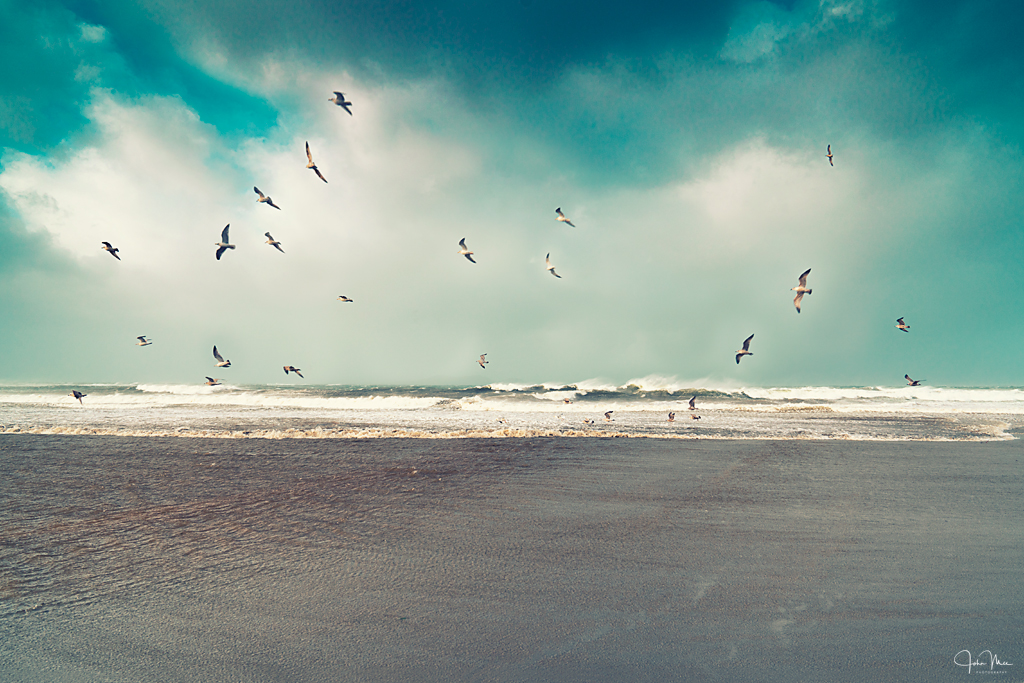 A flock of gulls were standing, facing into the wind near the shoreline. I wondered how they weren’t blown away. As soon as I came close, they lifted into the air and just hovered on the breeze until I backed off. The tide was out but coming in and small waves of water and sand were blowing across the beach.

There was no great wave action so any dramatic seascapes were out of the question. After a while here, I decided to head down to Doolough. I wasn’t really expecting to get any decent photos there but it’s always good for a visit. It’s about a 15 minute drive from Devlin and there may even be a photo opportunity on the way there. 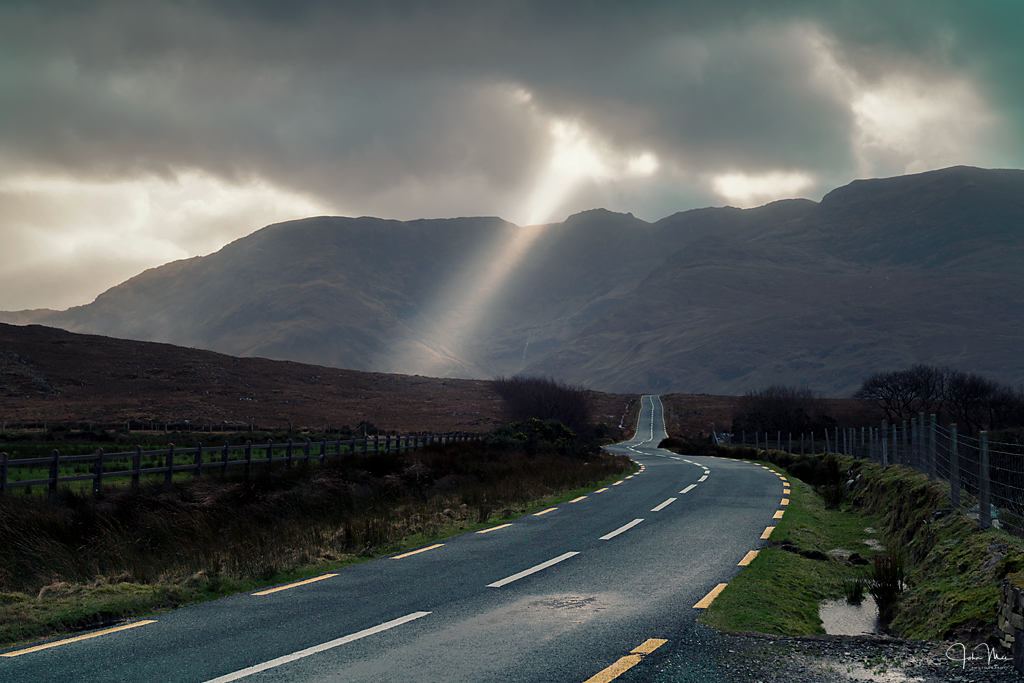 As I got closer to the valley, I spotted some clouds blowing through it … well, I thought they were clouds. Driving over the crest of the hill I was greeted by an amazing sight I hadn’t seen before. It was like the entire lake was bubbling and boiling over with big plumes of steam rising up into the sky.

Of course, it wasn’t steam – it was the water being pulled up from the lake by powerful gusts of wind from Storm Brendan. I hung around the famine memorial for a while, watching and taking photos. It was beautiful. 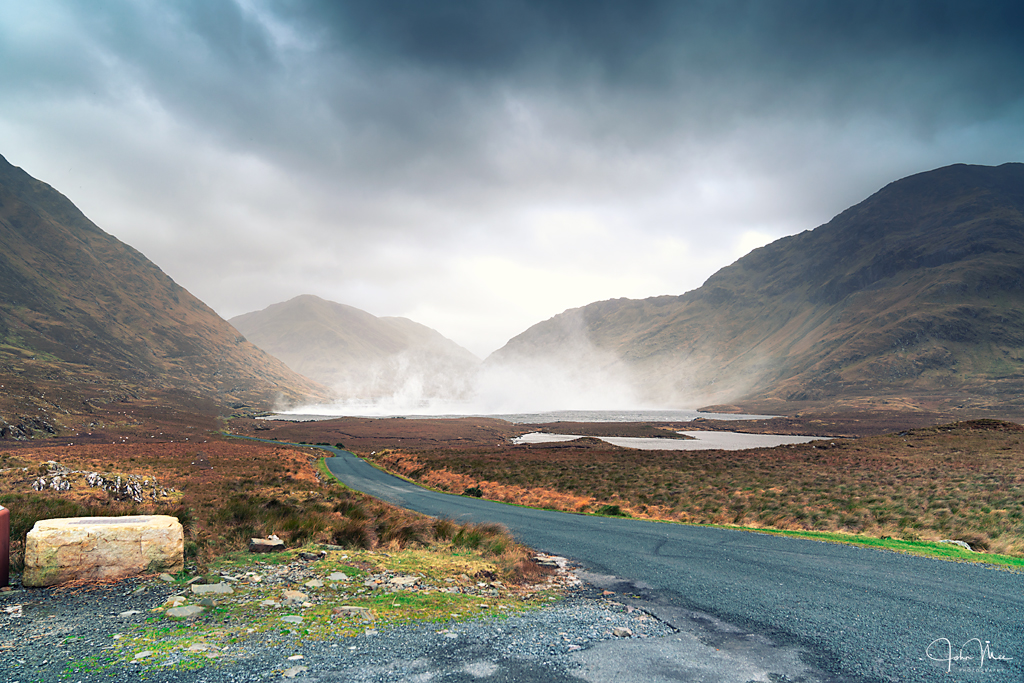 After a while I decided it was time for a different perspective so I got into the car and drove down towards the lake. I stopped at the side and got out. Switching my camera into video mode I walked to the edge of the lake. Then all of a sudden, that wind blew down through the valley and nearly lifted me off my feet. It brought with it leaves, twigs and a torrent of water and drenched me right through. I had to scarper back to the car and get inside.

It was then that I realised that I’d need to be more careful – I’d have to pick my times to shoot and where I would stand. Every 3 minutes a huge gust of wind was funnelled through the valley and sweeping the water of the lake. You can’t mess with weather like this. 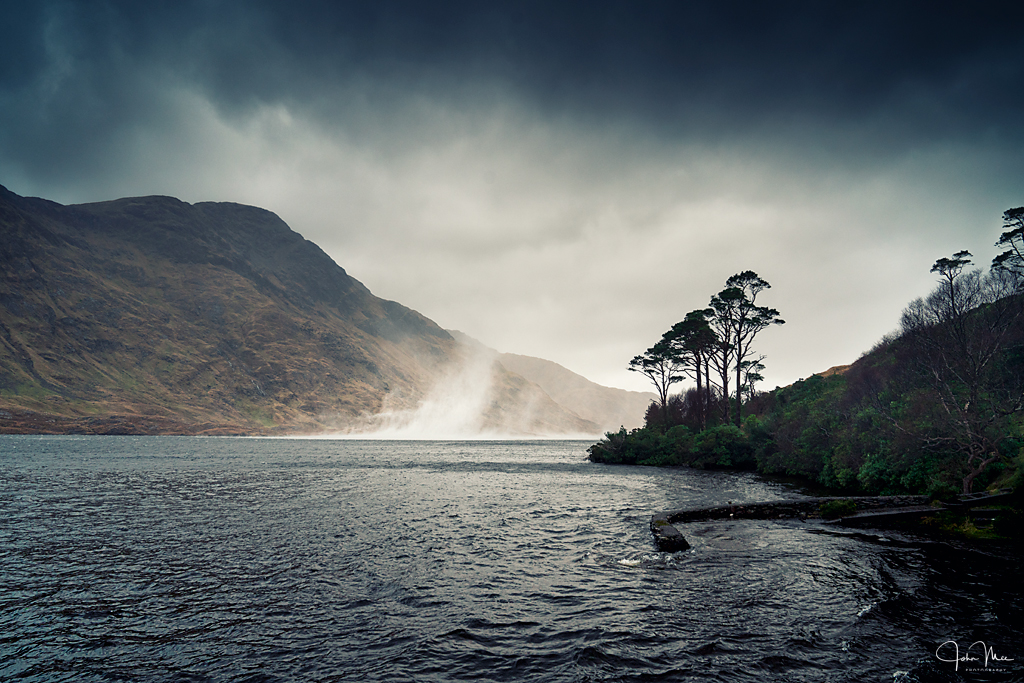 I continued down to the little harbour with the trees overlooking it and got a few shots from there. After a heavy shower of hail, I got into the car and headed back towards the famine memorial.
Stopping about halfway, I grabbed a couple more shots before deciding it would be better and safer to leave the area. I had my fun and got some shots – there was no point in risking things anymore. 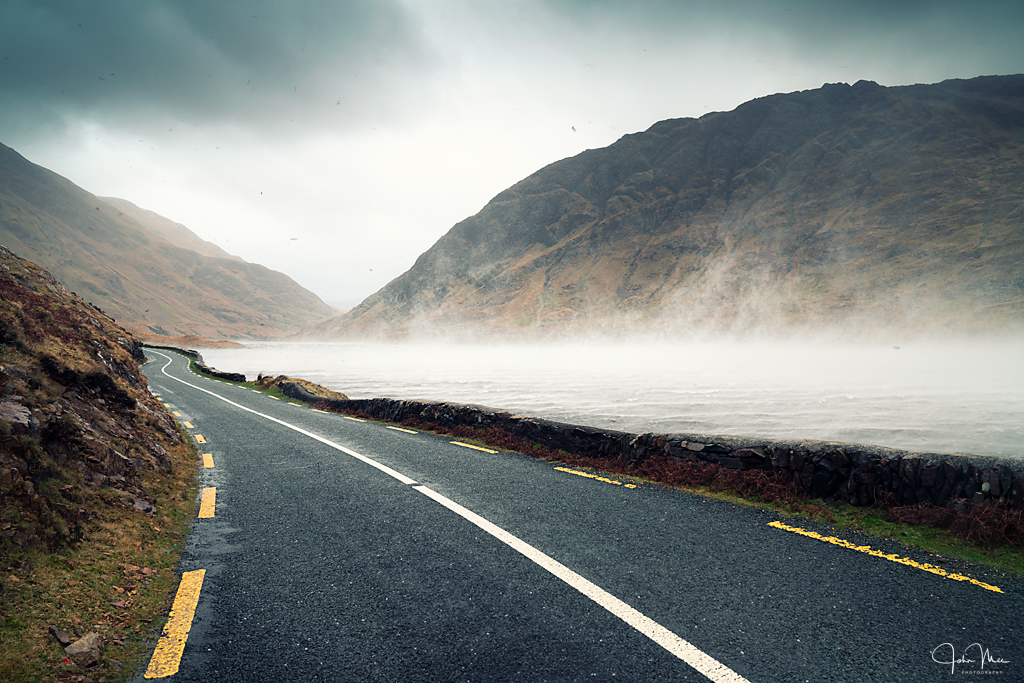 When I got to the top of the valley, I parked one more time and looked back. Doolough rarely disappoints and if you can get your head around the west of Ireland weather, good times and good photography will be your reward.
Thanks for reading this far and feel free to contact me if you’re interested in attending one of my landscape workshops. 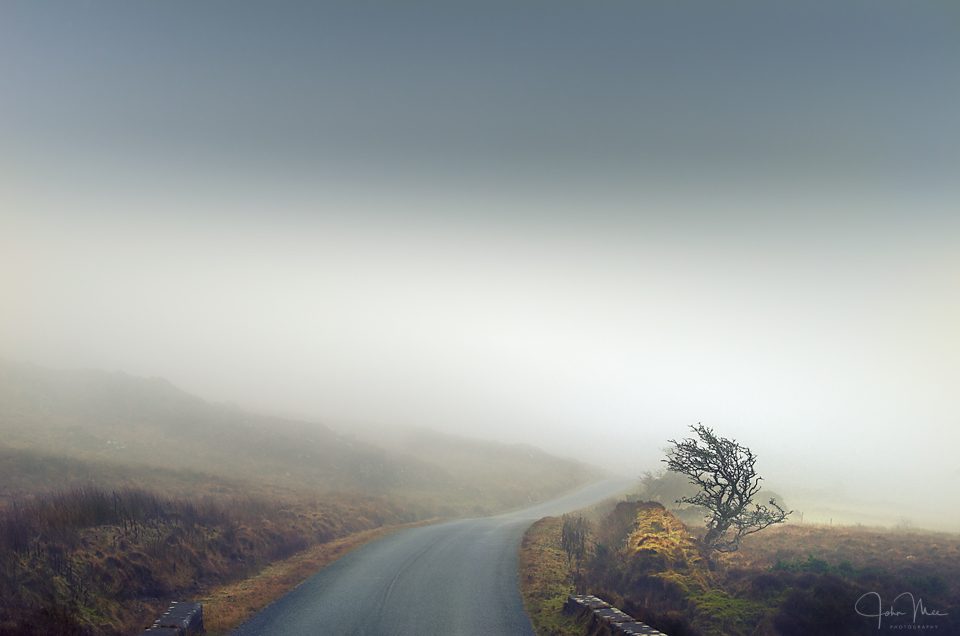 Foggy Day at The Windy Gap 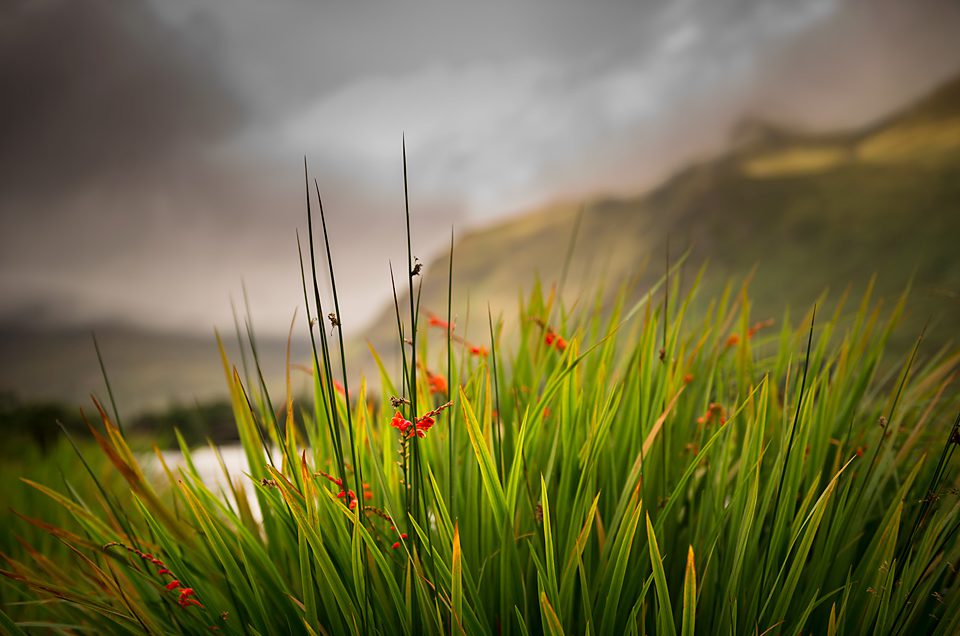 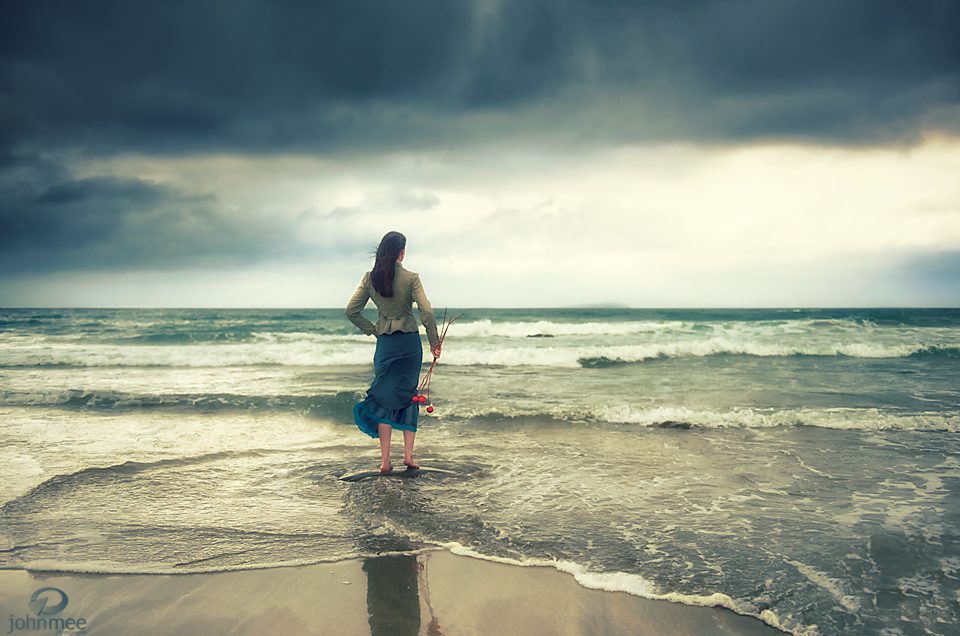 Creative Shoot at the Coast