This is not a technical review of the Sony A7R iii. It is a collection of thoughts and observations gathered over the last few months that I have been using it.
During that time, I have shot social functions, some sporting events, family shots, corporate headshots, landscape, portraits and personal work.

I spent some time thinking about and researching mirrorless cameras before upgrading to the Sony A7R iii. Up to this, I had always shot with Nikons and the full frame D800 was my current camera. Like all Nikons, it’s an extremely capable and excellent camera. However, as camera technology moves on so fast, it was beginning to show its age and I was longing for some of the features I had seen in newer systems.
Two brands stood out as having a mature lineup of options – Sony and Fuji.

So about six months ago, I bought the Sony A7R iii and the 24-70mm, F2.8 G Master lens.  Yes, it’s expensive. I justified the cost as I shoot commercially – and not just the workshops/tuition – I shoot events, people, corporate stuff, architecture, etc.

The new features and functionality in the Sony were amazing. What can I say about eye auto-focus. I use it all the time. No more focus and recompose when shooting people – the focus point just finds the eye and sticks to it. It’s not absolutely faultless – occasionally, it can struggle in low light but it works perfectly most of the time.

For this shot, I just pointed the camera and got my composition, the camera grabs focus on an eye – click and the shot is got. When people are at different distances from the camera like this, an aperture that’s not too shallow – f3.2 will ensure everyone is in focus. You can see all the potential focus points the camera could have focused on here but eye auto-focus ensures you capture the moment. 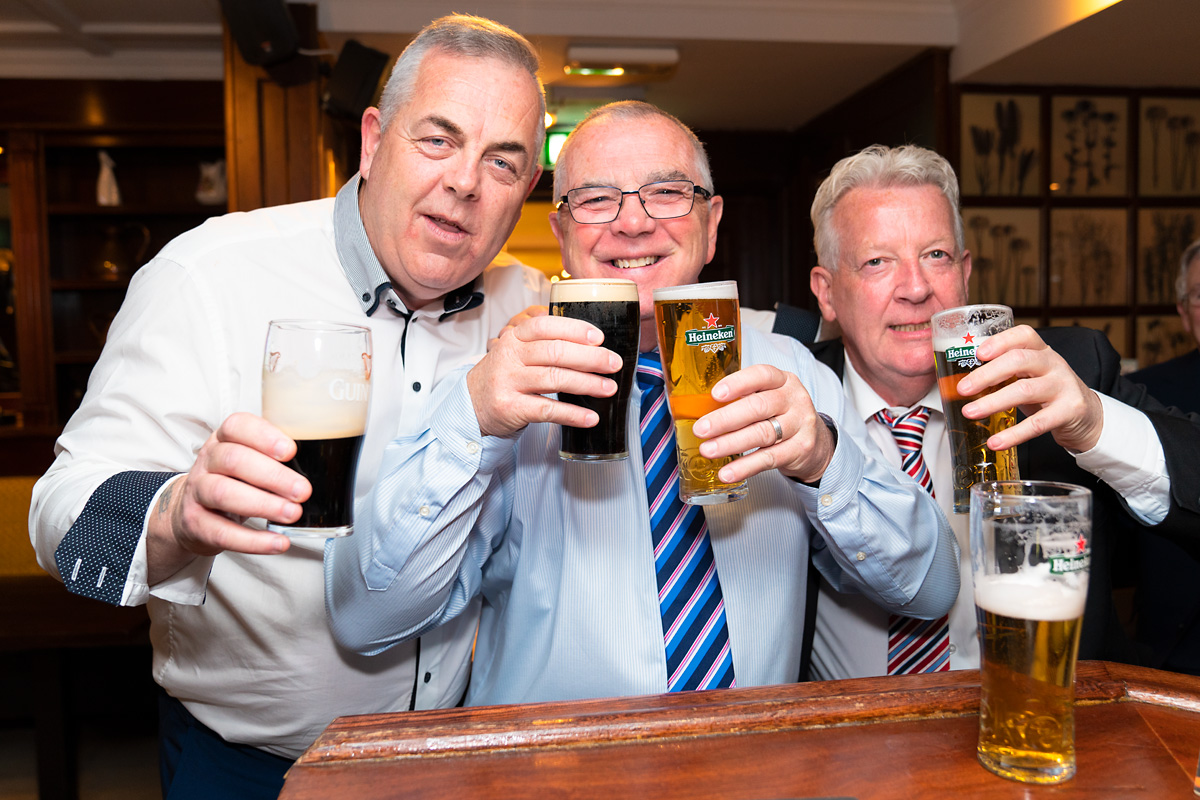 The EVF – electronic view finder is great and I got used to it very quickly. What you see through it, is what you get when you click the shutter button. It’s very quick and bright. The last time I looked through an EVF (which was a few years ago), there was a bit of lag when moving the camera around quickly.  In the Sony, it’s extremely responsive with absolutely no lag whatsoever. 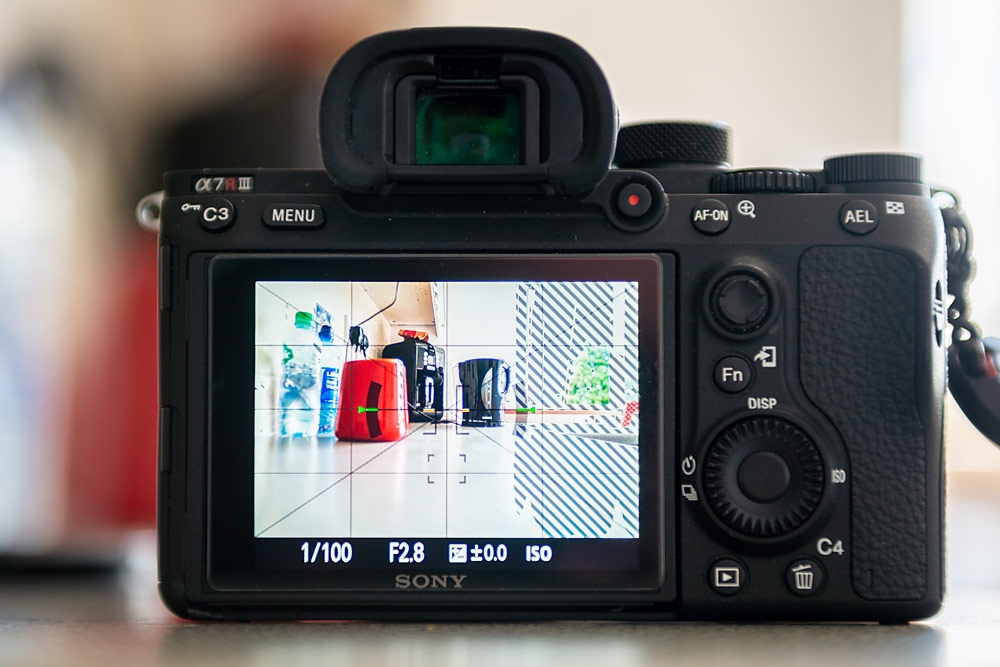 Zebras – those diagonal dark stripes on the right side indicate over-exposure.

Zebras – these are highlight warnings you see in the EVF or in Live View so that you know when the photo is over-exposed. Like most features in this camera, you can change the sensitivity of these to determine when they show up. The lower the sensitivity number, the later they appear. 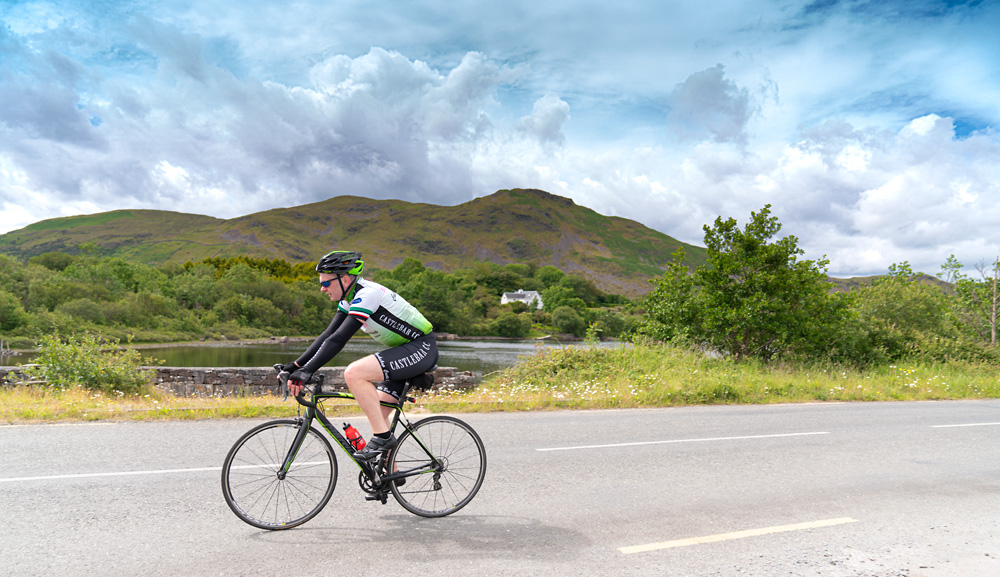 The dynamic range is so much greater than the Nikon – it can capture tones when there are very bright and very dark areas in the scene – this is something that I immediately spotted on Liams Sony when he attended a workshop with me late last year.
The shot above was taken on a very sunny day and the light was pretty harsh. Yet by shooting in raw, I was able to pull detail from the sky and still retain detail in the shadow areas. The sky in the original file look uninteresting until I drew a graduated filter down over it in Adobe Lightroom. I could have done this with a raw file from the Nikon D800 but I’d never have got that much tonal range and detail back. 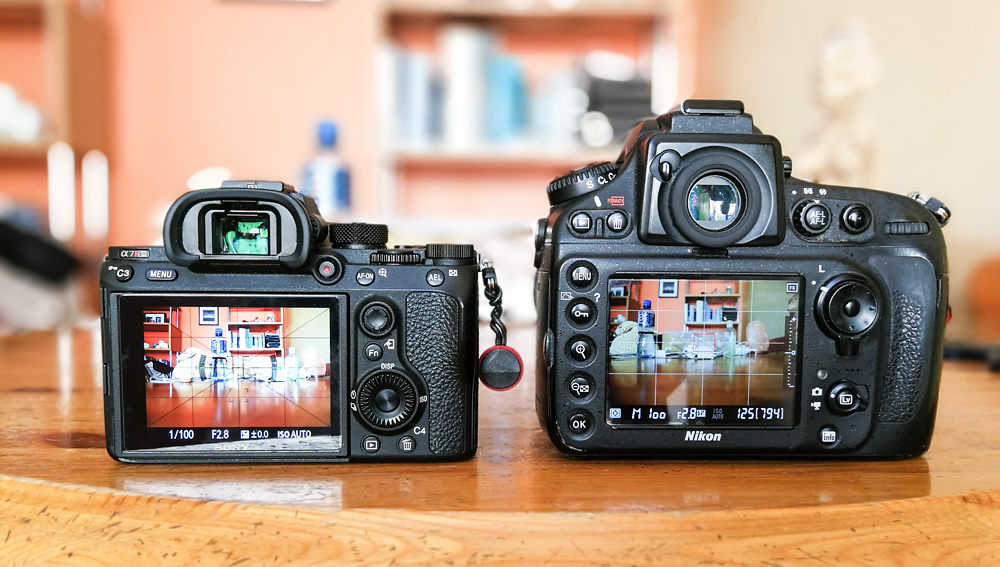 The small form factor is another plus – it’s a lot smaller than my D800. When i’m holding the Nikon with 24-70 lens attached, I feel I’m holding the body in one hand and the lens in the other. The Sony feels like I’m holding the lens and there is more freedom in my right hand to make adjustments. Lenses are about the same size though. The Nikon 24-70, F2.8 weights a tiny bit heavier than it’s Sony counterpart but you won’t notice. 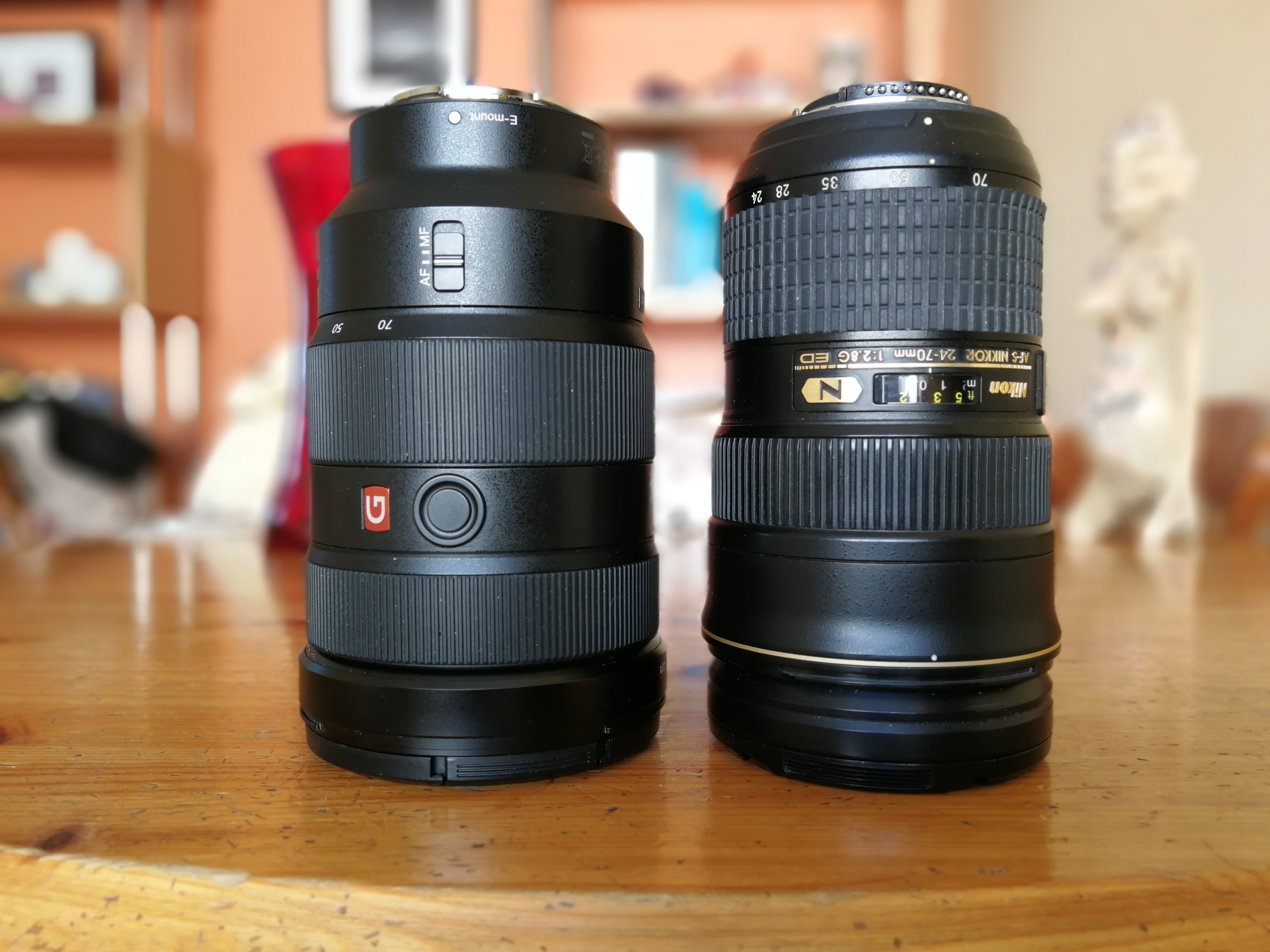 The file sizes from the Sony are big but I was used to this as they are big from the D800 too.
Video capability is really great and for me, it a big learning curve too – because there are so many options. But, this has made me think more about video now and it’s an option I intent to learn more about. The video on my Nikon was just not good enough for anything other than static stuff.

IBIS. In body image stabilisation is very good and I can shoot at slower shutter speeds than I could with the Nikon D800 previously – but within reason.

High speed shooting is excellent and it will continue to take photos at an astounding rate when in continuous mode. I use this quite a lot, at sports events and down at the coast when shooting waves.

I found the silent shutter great for shooting at events where you want/need to be quiet. It makes no sound whatsoever. One funny thing I noticed is that people continue to pose because they are waiting for the shutter click – I often have to tell them the shot is actually taken – you can stop smiling now. 🙂 Be aware, when used in locations where there are led lights, it can sometimes cause banding across your image.

There is a learning curve – it’s not simply a matter of continuing where you left off when transitioning from a Dslr to this camera. There’s a lot of new technology to get to grips with.

Initially, I set up the Sony to use it the exact same way as the D800 but I now know that this is not the way to go.  Because of all that new technology, it’s a different beast and you do need to change your shooting workflow somewhat. Once you realise this, everything becomes easier.

The weather sealing on the Sony does not appear to be as good as it is on the Nikon and if it were to start raining heavily, I would probably leave it in the car and shoot with the D800. That said, I have used it in light rain with no problem. 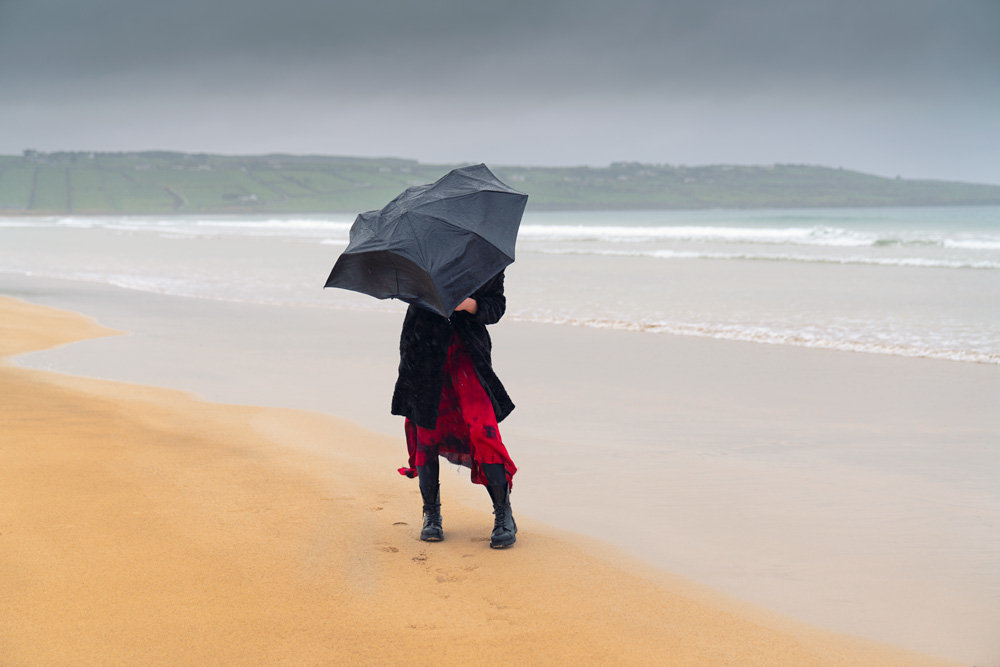 The focusing system, because there are so many options will probably be your biggest learning curve but there is loads of help available online. I think all of the mirrorless cameras will have the same amount of focusing options now and therefore the same learning curve too.

The menu system is vast and many people complain about it being overly complicated. This is because there are so many options. However, I found with a little time spent familiarising yourself, it wasn’t too bad at all. You can put all your most commonly accessed settings on to your own custom menu. You can also customise 12 options to the function (FN) menu button above the main dial on the back. In my opinion, this level of customisation is one of the strongest assets of the Sony A7R iii. 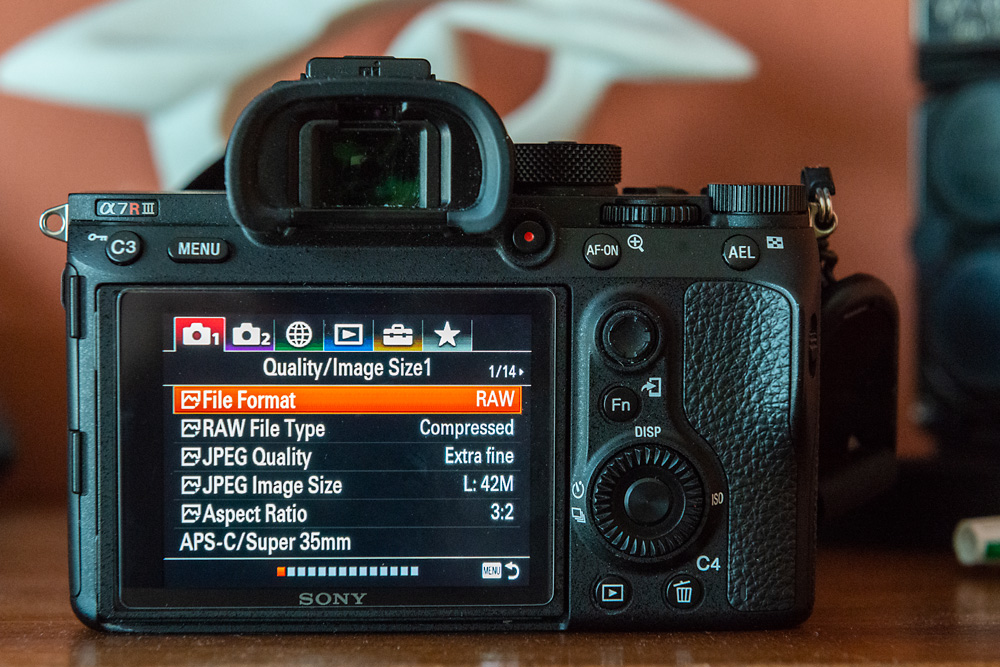 The camera doesn’t start up instantly like a Dslr. Because it’s like a small computer, it takes maybe about 1 second to 2 seconds before you can take a photo. This shouldn’t be a problem though and is considered normal for most mirrorless cameras. 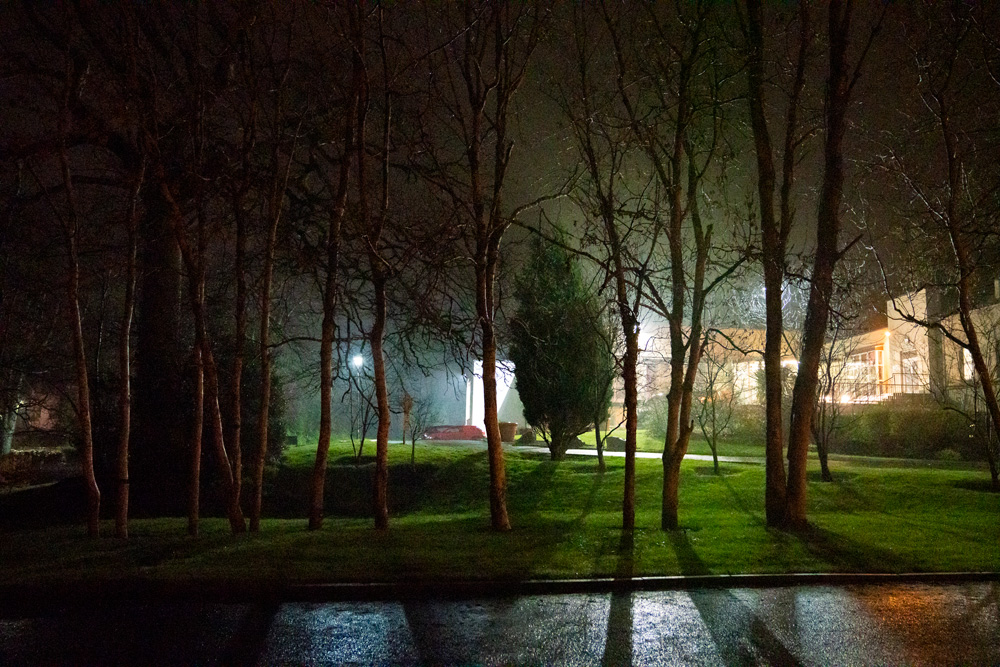 ISO capability is excellent and there will never be a problem pushing it up. I’ve shot successfully, commercially at ISO 10,000. A lot will depend on the end use of the photo and remember that digital noise will often be more apparent on-screen than in a print. The photo above was taken at ISO 32,000. yes – it’s full of grain but with a little noise reduction in Lightroom and considering it is for this article only, the noise is acceptable. 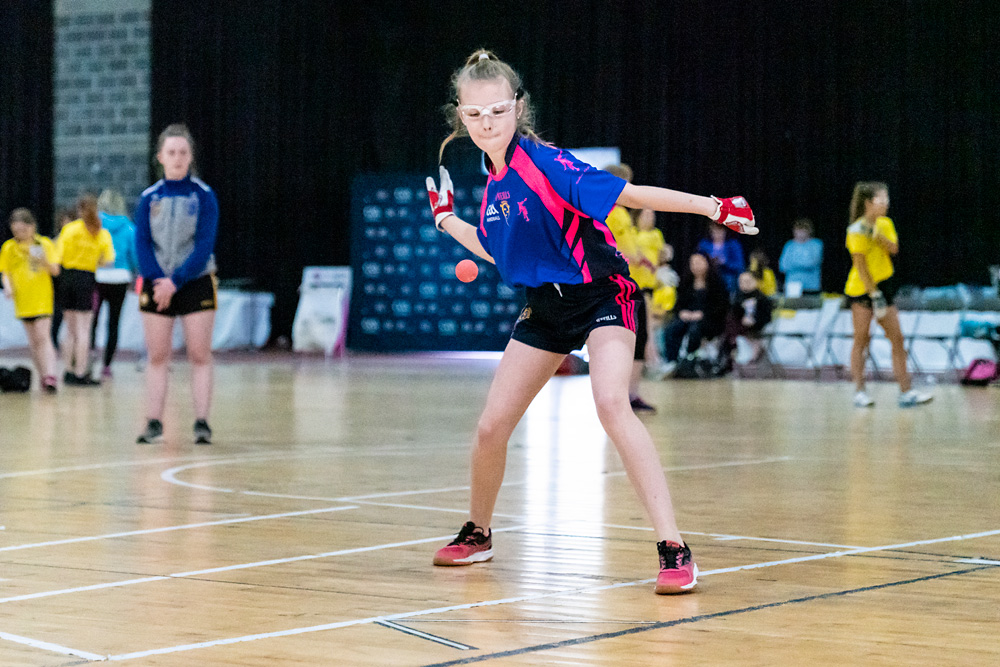 I’ve found myself using the tilting screen on quite a few occasions. It would be better if it actually swiveled around to face the other way but this hasn’t been an issue with me so far.
Focus peaking: When focusing manually, this highlights (with a red marking) where you image is sharp. I haven’t used this too much but when I did, it worked as advertised.

Overall, I’m very happy with the Sony and it’s my main camera now. The D800 is a backup if I ever need it – I’m sure it will be pressed into action at some time when I feel it is the right tool for the job. And of course, I still have a wider selection of lenses for the Nikon.

At the moment, for me, about the only feature missing is the ability to do a double exposure in camera. I like to experiment and for now, the Nikon is my goto camera for this too.  Perhaps a future firmware upgrade from Sony will remedy this. 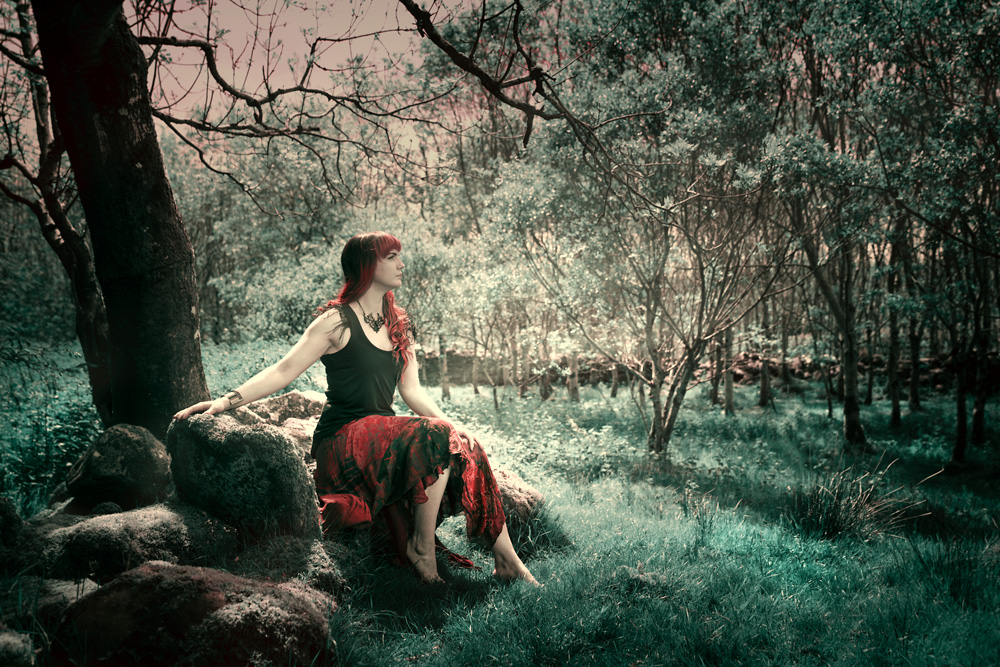 Another annoyance with the Sony is that whenever you put a flashgun or trigger onto the hotshoe, the evf brightens up, artificially. So, it no longer functions as a “what you see is what you get” option. This makes it harder to judge the ambient light. I would prefer that this didn’t happen as I want to see the ambient through the viewfinder and light the subject independently.
Yes, there are workarounds but I don’t know why Sony decided to change the evf behaviour like this.

Some have asked if I considered the Sony A7 iii instead of the A7R iii. I did.  But, I was coming from a 36 megapixel Nikon and I wanted to stay in that range. The A7R iii offers 42 megapixels as opposed to the 24 megapixels of the A7 iii. I wanted the extra resolution. The A7iii may be an option for you – it’s cheaper and apparently has better ISO performance. 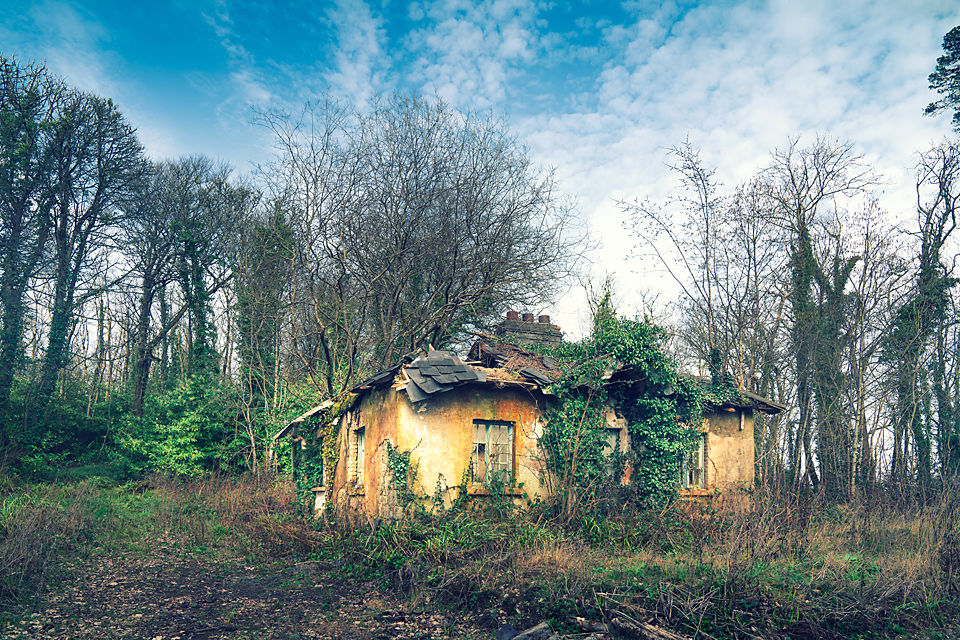 I have the 24-70mm, F2.8 G Master lens and I use this for nearly all of my work. I got this lens because I was using the equivalent on the Nikon for most of my work with that camera too.
I decided not to go down the adaptor route as I heard mixed reviews about them. Some lenses had problems with focusing and if they weren’t going to work 100% of the time, then it was not an option for me.

I researched but decided against the Nikon mirrorless Z6 or Z7 because I would still need an adaptor for my present lenses and also because, this is Nikons first foray into the mirrorless market. Sony have been producing them for years and therefore have a more mature lineup. They also have a wider range of lenses to choose from.

From what I’ve read, if you were to go for the Nikon Z6 or the Sony A7 iii, you would not be disappointed – both are very similar and both appear to be excellent cameras.

As I said at the beginning, this is by no means a technical review but rather, an overview of my thoughts from using it for the last few months. It’s exciting times for photography.
Thanks for reading this far and feel free to leave a comment below. 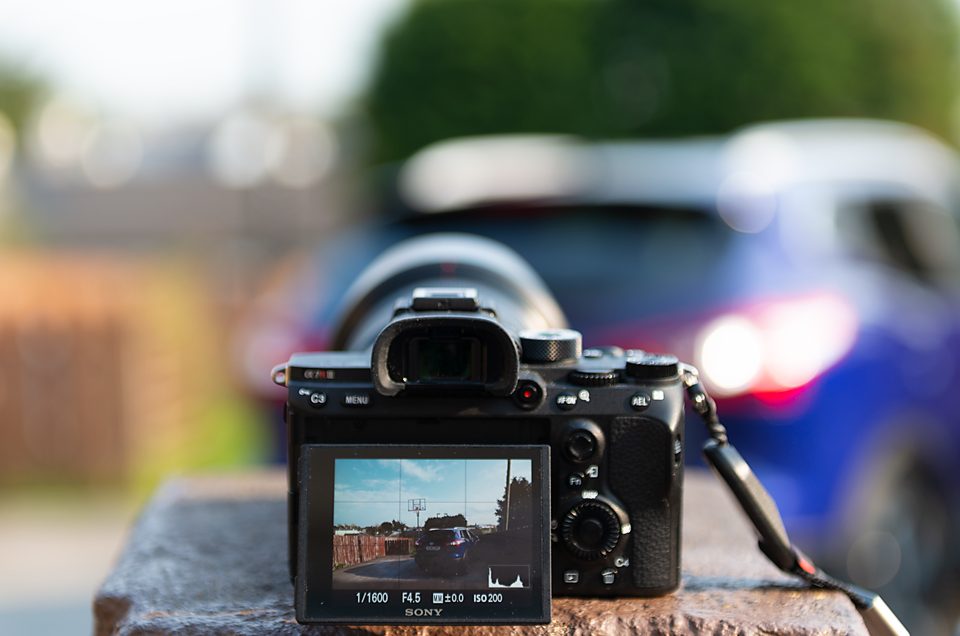