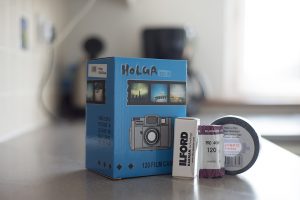 I’ve always liked old photographs – film photographs – and in particular, square format film photographs.
I like the way film forces us to slow down and think about what it is we are shooting, instead of blindly taking too many digital snaps.
There’s something about holding an old, curled up print in your hand that connects with us, and transports us. There’s a uniqueness about it. About how the photo, complete with all its flaws, mirrors life a little more accurately than a pristine, pin sharp, a technically perfect digital file does.
As a photographer, it’s the challenge of composing and telling a story within the confines of the square that attracts me. And it’s those flaws and those curled corners. And maybe, it’s just because film is different.

I bought an old Nikon Fe about three years ago but unfortunately, I don’t use it nearly as often as I should. It just seems too damned complicated! So, more recently I bought a cheap Holga 120N. It shoots film. It shoots square (or rectangle). There’s less pressure to “get it right”. It makes taking photos fun – funny even!
There are a few controls on it – but not many. You can select between two apertures – F11 for sunny days and F8 for cloudy days. 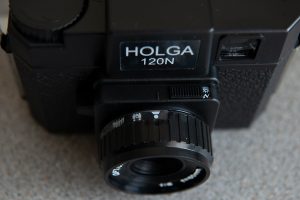 It has a fixed focus lens but it does offer four choices of object distance, ranging from one metre to ten metres. The focal length is about 60mm. As Ansel Adams said, you zoom with your feet.

The shutter speed is approximately 1/100th of a second. There is a bulb setting also for long exposures. And that’s about the extent of technical control you have.
After that, it all comes down to you … and what’s inside your head … and if you can translate that into a picture.

The build quality is “interesting”. It feels cheap and very different in the hand – big even. It’s made almost entirely of plastic and therefore is very light, especially when you’re used to carrying around a Nikon D800 with a 24-70mm lens attached. The only metal parts I could see were the clips holding on the camera back (which don’t do a very good job), the threading for attaching a tripod and the spring that operates the shutter. 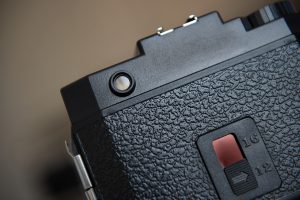 You have the option to shoot 6 x 4.5 (16 frames) or 6 x 6 (12 frames) size photos with the supplied film size masks. You will also need to set your preferred format on the back of the camera. This red window shows you the frame number too.

You need to be aware that light can, and will leak into the Holga, especially through this window.
Light leaks are part of the charm of this camera though, but you can cover up any gaps with the supplied black masking tape if you prefer not to have them. I have chosen to cover this red window. I have also masked off around the camera back and sides. I will probably leave the camera partly “unmasked” for a future roll of film to see the outcome. I suspect there will be some experimentation required.
Loading the black and white Ilford HP5 plus 400 120 film was fairly straightforward but I have wound it on too far and will be taking my first shot on the third frame. Lesson number one on the value of film – slow down.
Instead of the twelve shots I had hoped to get from this roll, I am now down to ten.

My first shot was of my young son. It was hastily composed as he was having a good laugh at the “toy camera”. 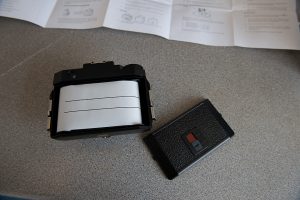 One interesting aspect is that because the viewfinder is offset from the lens, what you see is not necessarily what you get. It’s advised to point the lens directly at your subject. Either way, I will have to wait until the film is developed until I can see the outcome. The sense of anticipation is already there.
I am now trying to remember, stop, think and slow down. I have nine frames left so it may be some time before I get to see the final product.
Over the next few months, (providing I don’t tire of the camera), I will be keeping The Holga Diary updated. Hopefully, we can get along together. Perhaps we may even take some nice photos. Ideally, I will learn something from this technology that I can bring to my photography in general.
But most of all, I hope to enjoy this camera and it may finally allow me a way into the world of film photography.

Feel free to offer any tips, advice or stories about film in the comments below. Thanks all.
Read part 2 of the Holga diary here. 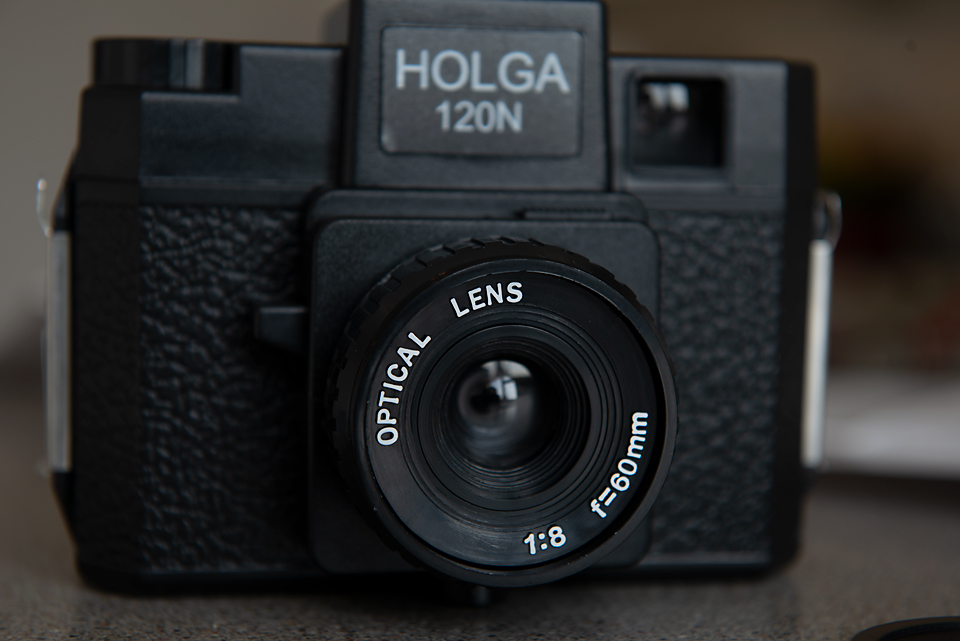